Brennan also fired off an ominous warning to President Trump implying he will be in a “world of trouble and hurt” after Republican Senators can no longer protect him.

Brennan, Comey and others have suggested that Donald Trump will be indicted after he leaves the White House and with every victory they become even more brazen.

Brennan needs to go to jail. Starting a counterintelligence investigation on a political opponent on zero factual basis, and in fact, inventing the basis in house is illegal. But, from Zero Hedge, Keep Your Powder Dry, Comey Is Not Out Of The Woods


There is no doubt that Jim Comey was part of a conspiracy to destroy Donald Trump and his Presidency. But all the evidence is not yet on the record.

There is some understandable frustration reverberating around the web that Comey is not being indicted in the wake of the latest Inspector General report detailing Jim Comey's inappropriate and unethical handling of Government material. But that is not the role of the Inspector General. It is up to DOJ to prosecute and a careful reading of the current report makes clear that there was not adequate foundation to get an indictment and prosecute.

However, if you believe that Jim Comey is getting a pass and will get away with corrupt activity, let me suggest you are overreacting and that patience is warranted. Comey is not out of the woods.

My only previous experience with Bill Barr was the role he played in making sure that the two guys who planted the bomb on Pan Am 103 were prosecuted. Barr was a straight shooter and would not cut corners. I also am friends with a person who worked directly for him during that period. That person insists that Barr is not going to let Comey and Brennan and Clapper off the hook. But that person also has reminded me that Barr will do it by the book and do it fairly.
. . .
Another critical Inspector General report on Russiagate is still pending and Comey faces great danger on this front. This one will cover the FBI's conduct with respect to the FISA warrant process. There is no doubt that Jim Comey lied to the FISA court in asserting that the information derived from the Steele Dossier was true and verified. But he will not be alone in this finding. Lying to a Federal court is a charge with weight and teeth. That is still hanging over Comey's head.

John Solomon, on Da Hill exposes Comey's classified misconduct and the media's flawed coverage of it. It's not just flawed, it's deliberately misleading.


For some reason, not one but two Washington Post columns have emerged, suggesting I misled readers. Media critic Erik Wemple suggested I had “slimed” Comey. Another columnist, Aaron Blake, suggested my reporting led to a misleading narrative on Fox News.

When confronted like this, a professional journalist has an obligation: Either retract and correct what you got wrong, or show the public the facts that affirm the reporting. I will do the latter. . .

Sundance at CTH finally got his Archey Declarations and They  Prove Comey/McCabe “Small Group” Hid Information From FBI Investigators, Until They Could Get Mueller Appointed…. It tells the interesting story of a FBI special agent who had to seek whistleblower status after having been dragged into the world of the "Small Group" by being assigned to search for Comey's memos. I'm glad some one is keeping track of the details, because I sure can't. But there sure was a lot of sleaziness under the DOJ/FBI blanket during this episode.

EBL has a more visceral reaction, Say A Little Prayer That James Comey Goes Away. Well, there's going away and there's "going away" IYKWIMAITTYD.


James Comey is one of the most pathetic preening posers I have ever seen. Everyone hates him. 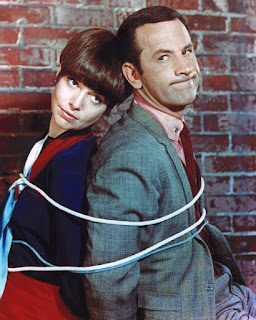 
It is impossible to know how Mr. Trump’s own behavior and calculations would have been different if he had been greeted with the usual presidential honeymoon rather than a concerted campaign to portray him as a Russian stooge.

But one judgment we are ready to render on Mr. Comey’s tenure: If he had chosen a different career (say, driving instructor) and never joined the FBI, I doubt we’d be lamenting his absence now. Indeed, it seems overwhelmingly likely that the country would be better off today without his heedless and ill-advised decisions.

A precedent from U.S. history doesn’t leap to mind but one from popular culture does: Maxwell Smart, the bumbling master spy with the inflated ego and talent for disaster from the TV show “Get Smart.” As Mel Brooks, creator of the rollicking 1960s sitcom, told a reporter at the time, “No one had ever done a show about an idiot before. I decided to be the first.”

The story of Russiagate is so complicated that they would need a long miniseries to get the gist of it.

Another from sundance, Devin Nunes: “We Have Briefed DOJ on Eight Criminal Referrals – Two for Criminal Conspiracy”…

Linked at Pirate's Cove in the weekly Sorta Blogless Sunday Pinup and linkfest and by EBL in
🌶️🔥Carolina Reaper Challenge 🔥🌶️ and From the USAF to Spying for the Iranians.
.