So, the transcripts of the call between President Trump and Ukrainian President ZZ Top are out, and as we expected, it settled everything. Just kidding of course. Everyone retreated to their corners and came out spinning like a electric grinder. I had to delete a page worth of outdated leaks I collected in the morning.


The White House has released the transcript of a call between President Trump and Ukrainian President Volodymyr Zelensky that occurred on July 25 of this year. While Joe Biden was mentioned, Trump's claim that there was "No pressure and, unlike Joe Biden and his son, NO quid pro quo" appears to be true. 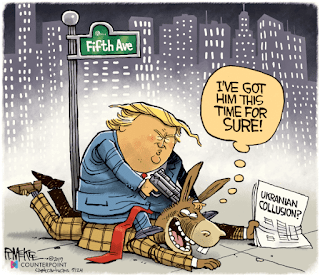 
The Department of Justice has released an unredacted transcript of a phone call between President Donald Trump and Ukrainian President Volodymyr Zelensky. The text was taken down by note takers. The call took place in July from the White House Situation Room. It shows no effort by President Trump to pressure Zelensky into investigating former Vice President Joe Biden's son, Hunter, in exchange for military aid. This action was falsely alleged by a whistleblower and pushed Democrats on Capitol Hill into an impeachment inquiry.

Jeff Dunleavy, WaEx, 'I would like you to do us a favor': Transcript reveals Trump asked Ukrainian president to investigate 2016 election and Bidens

1) Having read DOJ’s Trump-Ukraine release, here’s the real story: This is another internal attempt to take out a president, on the basis of another non-smoking-gun.
— Kimberley Strassel (@KimStrassel) September 25, 2019


Via the Wombat's In The Mailbox: 09.25.19, Power Line says Transcript Shows No Wrongdoing By President Trump,


So President Trump is doing the right thing in encouraging Zelensky to get to the bottom of a corruption investigation that may extend both to Ukraine and to the United States. That investigation, if it is pursued to the end, might not end happily for the Biden family, which apparently, at least, has gotten caught with its hand in a multi-million dollar cookie jar.


The completely over-the-top response by a Deep State embed whistleblower and his/her political allies withing the administrative state now makes sense; it had nothing to do with Joe Biden. President Trump asked President Zelenskyy about “Crowdstrike.”
(Page 3 – Source pdf)
To understand how important this is, we must remember the foundation for the entire Russian election interference narrative, ‘Muh Russia – writ large, is built on the claim Russians hacked the servers of the Democrat National Committee (DNC), and subsequently released damaging emails that showed the DNC worked to help Hillary Clinton and eliminate Bernie Sanders.

Despite the Russian ‘hacking’ claim the DOJ and FBI previously admitted the DNC would not let FBI investigators review the DNC server or cloud-based network. Instead the original claim was that the DNC provided the FBI with analysis of a technical review done through a cyber-security contract with Crowdstrike.

According to the original FBI statements made by James Comey: Crowdstrike did the captured imaging of the DNC network (servers/cloud), then conducted analysis, then provided a report to the DNC with their findings; and that report was given to the FBI. At least that was the original 2017 claim. However, during court filings in the case against Roger Stone, the DOJ/FBI later admitted they never even saw the Crowstrike final report.

In an update to  Hey, Dude, Where's My Formal Impeachment Inquiry?, Tom Maguire at Just One Minute also noticed the Crowdstrike reference;


CROWDSTRIKE: Trump mentions Crowdstrike. They were part of the DNC email investigation and tagged the Russian "Fancy Bear" as one hacker group. But they also had a controversial situation in the Ukraine involving a hack of Ukranian artillery fire control. Presumably Trump would love to discredit them.

2)As to call transcript itself: Trump’s actual “favor” is that Ukraine look backward, to what happened in the 2016 election. This is a legitimate ask, since election meddling looks to have come from both Russia and Ukraine.
— Kimberley Strassel (@KimStrassel) September 25, 2019


But you won't,  or at least shouldn't  be surprised to learn that liberals see the transcript as the perfect smoking gun. Nothing exemplifies this split so much as the food fight between Fox's Shepherd Smith and Tucker Carlson: Fox News Civil War: Tucker Carlson Repeatedly Mocks ‘Daytime Host’ Shepard Smith in Jawdropping Segment

AP, Democrats call whistleblower complaint ‘deeply disturbing’. MSN citing the LA Times, Trump's actions with Ukraine epitomize framers' idea of impeachable offense, scholars say. Alan He on Twitter: "Senator Sasse (R-NE) after reading the whistleblower complaint: "...Republicans ought not to be rushing to circle the wagons to say there’s no there there when there’s obviously lots that’s very troubling there...". 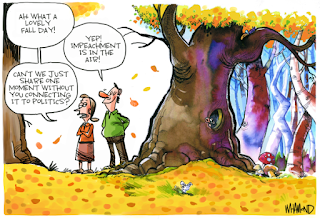 A slug from WaPoo, Intelligence chief to testify as whistleblower complaint is released.  Robert Kagan, If we legitimize Trump’s behavior, it’ll be open season on our politics. Trump’s call with Ukrainian leader is unlike anything presidential scholars have heard before. Maybe that's because private conversations between Presidents and foreign leaders are never released. The Editors The Trump-Zelensky readout is a devastating indictment of our president, but Hugh Hewitt, The rough transcript is nothing but an empty vault "Impeachment-minded Democrats, welcome to Al Capone’s vault. Look familiar?" Impeachment inquiry threatens to overtake Capitol, upend trade and spending talks

Given that the transcripts are a political Rorschach test, Democrats are now swearing the whistleblower complaint is definitely going to sink Trump. Streiff at Red State, Questions Raised About Intelligence Community Motives After Release Of The Office Of Legal Counsel Opinion On The Whistleblower Complaint. Their motives aren't in doubt, their veracity is.


SSCI Chairman Richard Burr and Vice-Chairman Mark Warner now inject the Senate into the process of advancing Adam Schiff’s Ukrainian “whistleblower” narrative. In a letter today Burr and Warner write to the attorney representing the “whistleblower”: 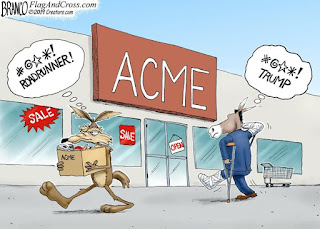 And this scandal came and went in the course of the day, Acting intel chief Joseph Maguire denies report that he threatened to resign


Acting Director of National Intelligence Joseph Maguire denied a report by The Washington Post Wednesday that he had threatened to resign amid the clamor over President Trump’s July phone call with the Ukrainian president.

“At no time have I considered resigning my position since assuming this role on Aug. 16, 2019,” Maguire said in a statement. “I have never quit anything in my life, and I am not going to start now. I am committed to leading the Intelligence Community to address the diverse and complex threats facing our nation.”

The Post report, which cited "current and former U.S. officials familiar with the matter," said that Maguire had threatened to turn in his resignation over concerns that the White House might try to make him stonewall Congress. He is set to testify Thursday about a whistleblower complaint that has spurred House Democrats to open an impeachment inquiry into Trump.

Unrelated to the transcription, the Post also opined, Andrew McCabe has been punished enough


Mr. McCabe has been punished proportionately for his alleged wrongs. More and more, the case against him looks like an act of political vengeance, draining the already-depleted credibility of the Trump Justice Department. If the case against Mr. McCabe is still active, it should end. 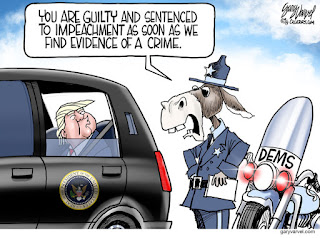 I disagree, and so might George Papadopoulos, who was jailed for lying to FBI investigators over misremembering a date.


In a stunning and very rare move today Federal Judge Anthony J Trenga has thrown out the conviction of a Mike Flynn’s partner Bijan Rafiekian (Flynn Intel Group) and granted the defendants’ motion to acquit. [Hat Tip to Techno-Fog for the ruling]

This is a huge blow to the DOJ-NSD who framed their special counsel case on sketchy FARA violations and bamboozled the jury with dubious legal theories. This type of intervention by a federal judge is very rare. Here’s the ruling

And just to clean up today's mess:

Ace of Spades HQ Live Press Conference; Trump Addresses Ukraine Hoax and Impeachment "Inquiry" "It's all a hoax, folks. It's all a hoax."

Ace of Spades HQ You're Not Going to Believe This, But the Media Is Ignoring and Justifying The Democrats' Overt Pressure on Ukraine to Open Political Investigations They Thought Would Hurt Trump

So, FOUR Democrat US senators did the SAME THING they are after Trump about, because the Ukraine was ending investigations they felt were helpful to the Mueller probe?! https://t.co/3Nddqc5C0g
— Tracy Beanz (@tracybeanz) September 25, 2019

READ: 6. Financial records from #MorganStanley show numerous lines of money going into the account of “Robert H. Biden.” The funds originated from oligarchs and anonymous LLCs in Ukraine, China, Kazakhstan and elsewhere

Trump: 'If You Impeach Me Now, I Shall Become More Powerful Than You Can Possibly Imagine' | The Babylon Bee
Posted by Fritz at 9:30 AM