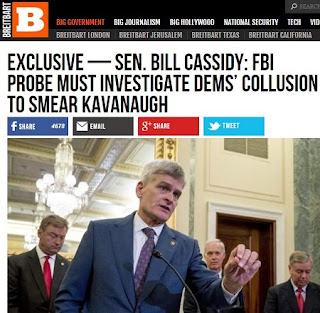 From Stacy McCain's: Never Negotiate With Sociopaths: Liars, Democrats and the #Kavanaugh Smear


Dianne Feinstein’s bad-faith handling of this accusation succeeded in delaying the Judiciary Committee’s vote, originally scheduled for Sept 20, by eight days. The stunt pulled Friday, with two Soros-funded activists tag-teaming Jeff Flake in an elevator, led him to demand an FBI investigation that will add at least another week’s delay in the process. What this will mean, in practical terms, is that Democrats and the media (but I repeat myself) will have another week to smear Judge Kavanaugh’s name while the FBI determines what everybody already knows: There is no evidence to support Professor Ford’s accusation, and much evidence that suggests she’s lying. What would be interesting to discover, however, is how this smear-job was coordinated. Let’s investigate, eh?


Louisiana Senator Bill Cassidy:
Just like their other tactics throughout this confirmation process, Senate Democrats’ demands for an FBI investigation have never been about getting the facts or finding the truth.
If they were, they would have alerted law enforcement months ago, as soon as they learned of the claims. Instead, they waited until the last minute to leak them in order to delay the vote.
That is why any FBI investigation of the allegations against Judge Brett Kavanaugh should include potential coordination between the Democrat operatives and lawyers that assisted in bringing them forth.
What Senate Democrats really want is more time to smear Judge Kavanaugh, regardless of the toll it takes on his wife, his daughters, and our country.
Democrats will not suddenly require evidence to declare Judge Kavanaugh guilty of being the worst kind of criminal. They will not suddenly abandon their assumption that all accusations against Republicans are credible and to be believed.
If the FBI turns up nothing significant, they will say what Joe Biden said in 1991, that the FBI does not reach conclusions. They will say the FBI did not have enough time to conduct a thorough investigation.
What they will not do is admit they were wrong to accuse Judge Kavanaugh of being a gang rapist, or a rapist, or a sexual assaulter, or a drunk, or a perjurer, or a hothead unfit for the bench.
If the delay facilitates new allegations from Michael Avenatti or someone else, it will not matter how ludicrous they are. Democrats will instantly call them credible, demand more delays, more FBI resources, and more hearings. They will attack anyone who disagrees.
Delay, delay, delay. That’s all they want, because their goal is to do anything and everything to smear any nominee — anyone — and block Republicans from appointing another justice to the Supreme Court.
We cannot and should not let that happen.

It was a mistake for Republicans to agree to further delay in the confirmation process, to appease Democrats who have been acting in bad faith since July, when Dianne Feinstein failed to share Professor Ford’s letter with her GOP colleagues. You cannot appease totalitarians, as we should have learned at Munich in 1938, and the way Democrats have run this game is as dishonest as Hitler claiming that the Sudetenland was his last territorial demand in Europe. “Peace for our time,” indeed.

Until the FBI investigation finds actual corroborating evidence of Chrissy Ford's charges, the FBI simply must investigate the origin of those charges. I see no reason why an investigation into the origins of the charges against Brett Kavanaugh cannot go on long after his confirmation.

UPDATE: Me, I hope the FBI will investigate who in Dianne Feinstein’s office leaked the story against Ford’s express wishes. Guess what:@POTUS: “I would like to find out as part of [the FBI investigation] who leaked the papers.”
Posted by Fritz at 10:07 AM