The trip to the outer darkness out of range of the internet was cancelled because the driver/owner got a kidney stone, so you'll take a Russiagate post and like it.

“Our review of these new documents raises grave concerns regarding an apparent systemic culture of media leaking by high-ranking officials at the FBI and DOJ related to ongoing investigations,” Meadows wrote to U.S. Deputy Attorney General Rod Rosenstein in the letter, which was obtained by The Daily Caller News Foundation and first reported by Sara Carter.

In the first message, Strzok, who then served as deputy chief of the FBI’s counterintelligence division, wrote to Page that: “I had literally just gone to find this phone to tell you I want to talk to you about media leak strategy with DOJ before you go.”
. . .
Meadows says in his letter that an April 12, 2017, text message shows Strzok congratulating Page while referring to two damaging articles about former Trump campaign adviser Carter Page.

Meadows wrote that “in the text, Strzok warns Page two articles are coming out, one which is ‘worse’ than the other about Lisa’s ‘namesake.'” “Well done, Page,” Strzok wrote. It is unclear if he was referring to Lisa Page or Carter Page.

Donald Trump calls Trump: ‘Unelected Deep State Operatives Who Defy the Voters to Push Their Own Secret Agendas’ Are a ‘Threat to Democracy’ It's about "anonymousgate", but it applies here too.

Power Line as a lot more on the Anatomy of a Fusion smear , specifically parts 2, 3, and 4. They also dissect the WaPo report that the Grand jury probe of Andrew McCabe heats up :


The grand jury activity, which includes hearing from witnesses, doesn’t mean McCabe will be charged with a crime. It seems clear, however, that prosecutors are taking the matter quite seriously.

As well they should. Robert Mueller’s team has prosecuted several people for not telling the truth to federal investigators. Based on the inspector general’s report, there is good reason to believe that McCabe committed the same offense. If he did, he should be prosecuted, just as those whom Mueller has scrutinized have been.

McCabe’s lawyer is crying foul, though, claiming that the investigation is politically motivated. This claim gains surface plausibility from President Trump’s tweets imploring the Justice Department to prosecute his enemies, including McCabe.

As noted, though, the investigation of McCabe is actually the byproduct of a Democrats’ investigation — that of Horowitz. Moreover, Jeff Sessions’ unwillingness to be cowed by Trump’s public call for partisanship in prosecutions should give fair-minded observers confidence that McCabe is not, and won’t become, the victim of a witch hunt.

I should also note that the case against McCabe may not be open and shut. For one thing, some of the evidence against him is based on clashing accounts by McCabe and James Comey about a conversation they had. Comey may not be telling the truth or the two might simply remember things differently.

So, basically, it's a crime if a citizen's recollections differ from an FBI agent's, but not if two FBI agents disagree. Powerline also remarks on Andy McCarthy's Mysteries of the Mueller probe:


McCarthy demonstrates that the improprieties and anomalies inherent in the Mueller probe are profound and varied. We have grown accustomed to them. We now take them for granted. McCarthy asks “the Republican-controlled Congress” to get answers if not to do something about it. Even if we know that is an impossible dream we should understand this isn’t how it’s supposed to be and do whatever we can to light a fire.

The Race to Get Trump in New York Courts by James W. Lucas at American Thinker. Funny that they weren't in much of hurry when he called himself a Democrat and contributed to their campaigns. Henceforth, and Democrat President should be subjected to criminal probes starting in Texas and Utah. 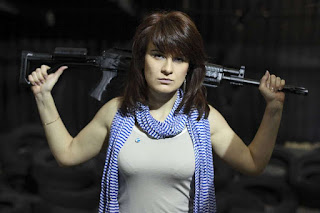 ABC News is still on the anti-Butina Bandwagon: Alleged Russian agent Maria Butina was paid to pursue access to Vladimir Putin for TV show. It's still not clear to me that she did anything but talk.Note that they are still holding onto the sex angle that the US government has already taken back.