Byron York at the WaEx writes Congress waits, waits, waits for Sally Yates documents. She was only Attorney General for 10 critical days. Congress wants to know what she was up to during that period, and the DOJ is flat refusing to produce anything. Even Obama's DOJ produced some of Eric Holder's Fast and Furious emails. Why are they withholding these, and why is Sleepy Jeff letting them get away with it? Maybe she had something to do with Warrants to Spy on Carter Page Obtained Without FISA Court Hearings, DOJ Filing Reveals. 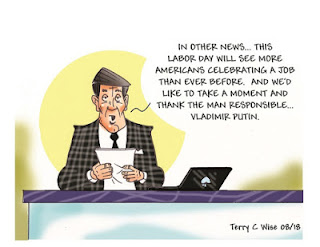 
Weissmann, among his other jobs, was lead prosecutor in the trial of former Trump campaign manager Paul Manafort. Weissmann was also Mueller's attorney on the ground, who oversaw the pre-dawn raid on Manafort's home. He was a key player in Mueller's team of angry Democrat lawyers and donors bent on bringing down the Trump presidency based on false charges of Trump collusion with Russians meddling in the 2016 presidential election. The problem is, as former deputy assistant attorney general Bruce Ohr's closed-door testimony before Congress shows, Weissmann had full knowledge of the fake nature of the Steele dossier, which was a major predicate of the Russian witch-hunt that became the Mueller probe. Weissman knew there was collusion with the Russians and that it was among the DNC; the Clinton campaign; British agent Christopher Steele; Fusion GPS; the DOJ; the FBI; and, yes, Russian sources interested in upending the Trump presidency.

In the parlance of the day, this would make Weissmann an unindicted co-conspirator in the Deep State plot to bring Trump down. He could have pulled the plug on the Mueller witch-hunt, but didn't. He could have pushed to go after Democrat collusion with Russia on the dossier, but didn't. 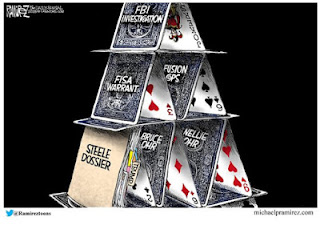 More, I think Weissman should prosecuted. But who will do it? It seems that prosecutors are extremely reluctant to set that example. I wonder why. Another question: Why isn't CHRISTOPHER STEELE being investigated for violating the Foreign Agent Registration Act (FARA)?  Where is the Tony Podesta indictment? Steele literally lobbied Bruce Ohr for the Russian Oligarch Darryl Deripaska to get into the US after sanctions, but he gets a pass. It seems to only apply to Republicans.

Getting ready for the October non-surprise: Mueller Persists Despite Trump Team’s Claim That the Clock Has Run Out. Go ahead, really surprise us and indict Hillary.


Earlier Wednesday, an FBI spokesman released what appeared to be a categorical statement about the Clinton server: “The FBI has not found any evidence the servers were compromised,” the FBI stated.

The statement does not address a central aspect of TheDCNF’s reporting, which was that the ICIG briefed top bureau officials on three separate occasions to warn the FBI of an “anomaly” they found in 30,000 in-bound and outgoing emails. The report is based on an intelligence official with direct knowledge of the matter. The anomaly showed a code embedded in Clinton’s server was producing in real time a “courtesy copy” to a third party.

The third party was a Chinese state-owned company based in Northern Virginia just outside of Washington, D.C., and was part of an ongoing Chinese government intelligence operation, according to two separate sources with direct knowledge of the matter.

According to one source, the last ICIG briefing was held in June 2016 about a month before former FBI Director James Comey stated that he did not recommend any indictment of Clinton for mishandling classified materials.

Comey in that widely reported July 5, 2016 press conference stated he did not find “direct evidence” that Clinton’s email domain was successfully hacked.

Ace: But they won't say whether or not the Intelligence Community Inspector General warned them that they had found such evidence. It's not turtles all the way down. It's weasels.


At least not at the Associated Press which allows Democratic Party activists to use its good name to disseminate disinformation. Some editor today approved a story that began, "A senior Justice Department lawyer says a former British spy told him at a breakfast meeting two years ago that Russian intelligence believed it had Donald Trump 'over a barrel,' according to multiple people familiar with the encounter."

Someone at AP needed to ask, who cares?

The story as reported boils down to Christopher Steele, the spy in question, and Bruce Ohr, the lawyer in question, had breakfast on July 30, 2016.

The real news was the breakfast itself, which was relegated to Paragraph 14: "One of the meetings he recounted was a Washington breakfast attended by Steele, a Steele associate and Ohr. Ohr’s wife, Nellie, who worked for Fusion GPS, the political research firm that hired Steele, attended at least part of it."

Ohr was not only married to a woman who worked for the company Hillary and the DNC hired to get dirt on Donald John Trump, but Ohr was meeting with the man in charge of delivering the dossier.

The only collusion with Russians was Steele and his sources at the Kremlin getting together to put together a dossier aimed at bringing down a duly elected American president.


Davis admitted he was a source for a triple-bylined July CNN story that said Cohen was present with Trump when the then-candidate learned about the Russians’ offer to help his campaign and gave the OK for the meeting.

The article cited “sources with knowledge.” Davis said he suspected Trump might have known of the meeting in advance and had hoped the veteran CNN journalists, including Watergate reporter Carl Bernstein, would dig into the story. His hunch wasn’t meant to be taken as fact, he said.

“It’s the lesson that I have learned,” he said. “If I’m not certain, even on background, I should not be asking reporters to do investigative work.”

Despite Lanny's denial, CNN is still limping around on this story.
Posted by Fritz at 8:19 AM