Tom Maguire at Just One Minute: The Ohr-Steele Breakfast Struck A Nerve

The report that retired MI-6 dirt-dogger Steele had briefed senior FBI veteran Ohr about the infamous Steel dossier at a July 30 meeting has struck a nerve.

The NY Times has a river of leaks from the Ohr/FBI/Clinton/Comey side explaining their long time relationship. Since both were involved with probing the Russian mob, large parts of the story ring true.

However! Folks with a long memory (or for those to whom it seems like a long time) this theme of 'controversial leaks followed by exculpatory leaks' is a replay of the May 16, 2018 Times story about the genesis of "Crossfire Hurricane". Back then, when the controversy was whether the Steele dossier had fueled the Carter Page FISA warrant, we were assured that "Crossfire Hurricane" had been launched on July 31 in response to the news that George Papadopoulos had been tipped about Russian possession of emails. We can feel the drama in the lead:


WASHINGTON — Within hours of opening an investigation into the Trump campaign’s ties to Russia in the summer of 2016, the F.B.I. dispatched a pair of agents to London on a mission so secretive that all but a handful of officials were kept in the dark.
Their assignment, which has not been previously reported, was to meet the Australian ambassador, who had evidence that one of Donald J. Trump’s advisers knew in advance about Russian election meddling. After tense deliberations between Washington and Canberra, top Australian officials broke with diplomatic protocol and allowed the ambassador, Alexander Downer, to sit for an F.B.I. interview to describe his meeting with the campaign adviser, George Papadopoulos.
The agents summarized their highly unusual interview and sent word to Washington on Aug. 2, 2016, two days after the investigation was opened. Their report helped provide the foundation for a case that, a year ago Thursday, became the special counsel investigation. But at the time, a small group of F.B.I. officials knew it by its code name: Crossfire Hurricane.

Deep in the story the dossier appears:


The F.B.I. bureaucracy did agents no favors. In July, a retired British spy named Christopher Steele approached a friend in the F.B.I. overseas and provided reports linking Trump campaign officials to Russia. But the documents meandered around the F.B.I. organizational chart, former officials said. Only in mid-September, congressional investigators say, did the records reach the Crossfire Hurricane team.
Mr. Steele was gathering information about Mr. Trump as a private investigator for Fusion GPS, a firm paid by Democrats. But he was also considered highly credible, having helped agents unravel complicated cases.

Hmm. So now we know that the "friend in the F.B.I. overseas" was Ohr, and that Crossfire Hurricane was launched the day after the dossier was presented. Kind of buried the lede there.

To be fair, there is no way the FBI responded exclusively to the dossier by formally opening an investigation one day later. But asking me to believe it took Ohr several weeks to tip off his colleagues? Please.


For Congressional investigators looking for a pathway to determine the genesis of the Trump-Russia Investigation, the actions of the FBI’s Eurasian Squad and the CIA’s Fusion Center might be an excellent place to start.


If Mr. Ohr is only now under the spotlight, it’s because it has taken so much effort to unpack his role in the FBI’s 2016 investigation of the Trump campaign. Over the past year, congressional investigators found out that Mr. Ohr’s wife, Nellie, worked for Fusion GPS, the opposition-research firm that gave its infamous dossier, funded by the Hillary Clinton campaign, to the FBI. They then discovered that Mr. Ohr had numerous interactions of his own with Fusion chief Glenn Simpson and dossier author Christopher Steele, and that he passed on information from these talks to the bureau. So the G-men were being fed the dossier allegations from both the outside and the inside.

Imperator Rex has a theory on why the Carter Page FISA application was never subjected to a hearing. Because Loretta Lynch ordered it:  HEADS UP. We know that the FISC didn't have a hearing to issue the Title I warrant, to spy on Carter Page. Why? It wasn't the FISC that i […]" #FakeNews #MAGA. Maybe, and maybe someday we'll find out for sure. 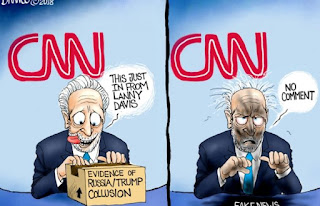 
Kavanaugh’s questions about the Nixon tapes ruling came during a lawyer roundtable discussion almost two decades ago. The ruling, which led to Nixon’s resignation to avoid impeachment, unanimously rejected his claim that executive privilege protected him from having to release the tapes to a special prosecutor.

“Maybe Nixon was wrongly decided -- heresy though it is to say so,” Kavanaugh said in a discussion published by The Washington Lawyer in 1999. “Maybe the tension of the time led to an erroneous decision.”

He offered a different perspective in a 2016 Catholic University Law Review article. He listed the Nixon ruling and three other decisions in saying that "some of the greatest moments in American judicial history have been when judges stood up to the other branches, were not cowed, and enforced the law."

Kavanaugh almost certainly will be asked to explain the apparent inconsistency.

"There are various ways by which these two sets of remarks could be reconciled," said Ilya Somin, a constitutional law professor at George Mason University’s Scalia School of Law. "Or you could just say it’s possible that he’s changed his mind over time. The answer seems like it could be pretty important."

Kavanaugh will also face questions about a 2009 law review article in which he suggested Congress should insulate the president from criminal investigations while in office. The article didn’t explicitly say whether, in the absence of action by Congress, a president would have to comply with a subpoena or submit to an interview with a prosecutor.

"What he advocated was that Congress pass laws," Somin said. "If Congress has to pass laws, that suggests that he doesn’t necessarily believe that the Constitution by itself precludes such investigations."

A judge who considers the questions? How odd! Elizabeth Vaughn at Red State: Why Doesn’t President Trump Appoint His Own Special Counsel?


Trump has been quietly allowing the scenario to play out. He has tried to remain on the sidelines for fear that his intervention would be viewed as evidence of his guilt.

But, after over two years, it doesn’t show any signs of stopping, because Mueller wants to keep the cloud of suspicion hovering over the Trump administration for as long as he can.

In the meantime, the real crimes have been committed by Hillary Clinton and by officials at the top of the Obama administration, perhaps even by Obama himself.

A special prosecutor needs to be appointed and given free access to all of the resources Mueller has had at his disposal including access to unredacted documents which DOJ and FBI officials have been so reluctant to provide. The prosecutor can take the evidence that’s already been revealed and run with it until all the corruption has been exposed and all of those who abused their power have been brought to justice. It’s time to fight back.

But, the selection must be perfect. Historically, Special Counsels take their mandates and run far beyond.
Posted by Fritz at 9:04 AM