Rest Assured, We Still Have Russiagate

A lot packed into the first one  Ace cites Chuck Ross in Bruce Ohr Testified He Had Told His Colleagues About His Off-the-Books Work With Christopher Steele, But Hid It From His Superiors


One mystery surrounding Ohr and Steele was who he told at the Justice Department about his interaction with Steele
* Ohr testified that he told his peers, but not his superiors, about the dossier-related contacts
Department of Justice official Bruce Ohr told Congress earlier this week that he informed half a dozen FBI and Justice Department officials about his contacts with dossier author Christopher Steele and opposition researcher Glenn Simpson.
Sources familiar with Ohr’s testimony before the House Judiciary and House Oversight Committees told The Daily Caller News Foundation that Ohr informed Andrew McCabe, Peter Strzok and Lisa Page about his interactions with Steele and Simpson. He also informed Justice Department prosecutor Andrew Weissmann about his dossier-related work.
Weissmann is now serving as right-hand man to Robert Mueller at the special counsel's office.
Ohr testified that he informed his Justice Department peers, but not his superiors, about his contacts with Steele and Simpson. One of the superiors kept out of the loop was former Deputy Attorney General Sally Yates. Ohr said he was demoted as assistant deputy attorney general in December because he failed to tell Yates and other top officials about his dossier interactions.
Republicans have sought an interview with Ohr to find out why he maintained contact with Steele even after the FBI decided to cut ties with the former British spy just before the 2016 election. The FBI said in applications for spy warrants against Trump campaign adviser Carter Page that the bureau dropped Steele as an informant because he had unauthorized contacts with the media. Despite that, Ohr met and spoke with Steele numerous times through May 2017. Ohr debriefed the FBI at least 12 times following his post-election contacts with Steele.
Weissmann’s contact with Ohr about the dossier is significant because of the mutual interest that Weissmann and Fusion’s Simpson had in former Trump campaign chairman Paul Manafort.
Simpson, a former Wall Street Journal reporter, has told Congress that Fusion GPS investigated Manafort's links to Russian oligarchs as part of its anti-Trump project.
...
As chief of the Justice Department’s criminal fraud division, Weissmann was investigating Manafort even before the special counse's team was formed.
* DOJ official Bruce Ohr testified before Congress on Tuesday about his contacts with Christopher Steele, the author of the dossier . . .

I'm curious if this testimony has anything to do with the alleged discrepancies between Ohr's testimony and the testimony of Lisa Page and Glenn Simpson.

Reps. Ratcliffe and Jordan note that none of this was disclosed on FISA applications: 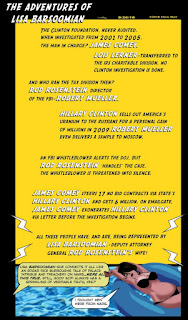 A couple of things of note here. Bruce Ohr didn't tell his superiors about his contacts with Steele, only those below him, and some co-conspirators around his own level. I think that shows consciousness of guilt. Next, Weissman was already tied into the investigation when it got shifted over to Mueller, much the way Strzok and Page were. Mueller's investigation appears to be a continuation of the same bogus investigation using the Carter page  FISA warrant. More on that later. Also by Chuck Ross at Da Caller: Giuliani Says Bruce Ohr Should Be Investigated For Possible Felony  Absodamnlutely. If he's innocent, what does he have to fear, AmIright? In an attempt to salvage Ohr's reputation, the AP reports Lawyer was told Russia had ‘Trump over a barrel’, and they got that straight from Putin's disinformation campaign headquarters. The same reliable Kremlin sources told them that Carter Page "had met with higher-level Russian officials than the aide had acknowledged." That they have never found any other evidence for.

And speaking of the Carter Page prosecution, how is that going, Uncle Bob? Judicial Watch managed to pry information out of DOJ that suggests that the FISA warrants against Page were never subjected to any sort of hearing, just rubber stamped by the court. Justice Department Discloses No FISA Court Hearings Held on Carter Page Warrants


In the filing the Justice Department finally revealed that the Foreign Intelligence Surveillance Court held no hearings on the Page FISA spy warrants, first issued in 2016 and subsequently renewed three times:

The Department of Justice previously released to Judicial Watch the heavily redacted Page warrant applications. The initial Page FISA warrant was granted just weeks before the 2016 election.
. . .
“It is disturbing that the Foreign Intelligence Surveillance courts rubber-stamped the Carter Page spy warrants and held not one hearing on these extraordinary requests to spy on the Trump team,” said Judicial Watch President Tom Fitton. “Perhaps the court can now hold hearings on how justice was corrupted by material omissions that Hillary Clinton’s campaign, the DNC, a conflicted Bruce Ohr, a compromised Christopher Steele, and anti-Trumper Peter Strzok were all behind the ‘intelligence’ used to persuade the courts to approve the FISA warrants that targeted the Trump team.” 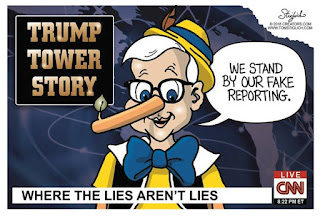 Since the warrants are secret, and those accused cannot defend themselves, the DOJ is supposed to reveal any material that mitigates against the charges. Of course, none of that is to be found.

Judicial Watch is also suing the DOJ for all records regarding Nellie Ohr:


We were in court this week before U.S. District Court Judge Reggie B. Walton regarding communications of the Office of the Attorney General with Nellie Ohr, the wife of former Senior DOJ Official Bruce Ohr, who was critical to the creation of the Clinton/DNC dossier. The subject of the hearing was the lawsuit we filed on March 1 this year after the Department of Justice failed to respond to our December 12, 2017, FOIA request (Judicial Watch v. U.S. Department of Justice (No.1:18-cv-00491)). We are seeking:


All records of contact or communication, including but not limited to emails, text messages, and instant chats, between DOJ officials in the Attorney General’s Office and Fusion GPS employee or contractor Nellie Ohr.

Judge Walton shares our frustration with a bureaucracy trying to keep its secrets.

Katelyn Polantz at CNN reports Two prosecutors leave Mueller's office. I doubt he ran out of things to investigate, so it this another thing like Strzok and Page, who were eased out before their roles in Russiagate became public? Mueller's office denies it, but they would.

Mike Allen at Axios on Robert Mueller's secret files. ABC: Ex-Trump adviser Roger Stone says he expects Mueller to charge him with a crime. "The Mueller team wants "to frame me for some nonexistent crime to silence me and pressure me to testify against the president," says Stone." Don't laugh because that's precisely what Special Prosecutor Fitzgerald did with Scooter Libby, trying to get him to implicate Dick Cheney in a crime.


Federal prosecutors on Friday targeted a veteran Republican lobbyist in a case referred by special counsel Robert Mueller, landing a guilty plea and cooperation from the political operative who illegally purchase tickets to President Trump’s inauguration on behalf of a foreign client, according to court papers.

The lobbyist, Sam Patten, pleaded guilty to acting “as an agent of a foreign principal, to wit, the Opposition Bloc (a Ukrainian political party) and its members, without registering” as a foreign lobbyist, according to court documents filed by the U.S. Attorney’s Office in Washington, DC.

Bloomberg: Trump Inaugural Committee Got Foreign Money, Plea Deal Shows. What I want to know is how buying tickets to a public event can be a crime, and did anyone look at Obama? And what is the statute of limitations on that heinous crime?


Rudolph W. Giuliani, the former New York mayor now serving as Trump’s personal attorney, played down the importance of the Patten case in a statement Friday.

Victor Davis Hanson: Mueller Is Looking At The Wrong Collusion Scandal. You should read all of VDH.


After 15 months, Mueller has indicted a number of Trump associates, but on charges having nothing to do with Russian collusion. They faced inordinately long prison sentences unless they "flipped" and testified against Trump.

We are left with the impression that Mueller cannot find much to do with his original mandate of unearthing Russian collusion, but he still thinks Trump is guilty of something.

In other words, Mueller has reversed the proper order of jurisprudence.

Instead of presuming Trump innocent unless he finds evidence of Russian collusion, Mueller started with the assumption that the reckless raconteur Trump surely must be guilty of some lawbreaking. Thus, it is Mueller's job to hunt for past crimes to prove it.

While Mueller so far has not found Trump involved in collusion with foreign citizens to warp a campaign, there is evidence that others most surely were colluding — but are not of interest to Mueller. . .

"Steele was likely working for Putin-linked Russian oligarch Oleg Deripaska at the exact same time he was telling Hillary and the press that Trump’s alleged ties to Russia were treason. "


Speculation was running rampant on the Friday before Labor Day, however, that Mueller could issue a final report and formally conclude his end of the investigation before the long weekend.

As of Friday morning, Mueller had not responded to a weeks-old letter from Trump's legal team laying out the conditions on which the president would consent to an interview, suggesting with the action that the president's testimony is no longer required or that investigators are tracking down new leads before consenting to a deal.Or, worse for the president, Mueller was predicted to be planning a bombshell announcement that could send shock waves through Washington.

A spokeswoman for the Department of Justice told DailyMail.com on Friday morning it's 'fake news' that action is imminent. Sarah Flores said an announcement coming out of DOJ would be minor and would not directly involve the special counsel.

So he's going to produce the regularly scheduled Democrat's October surprise? From WaPo, but via Jewish World Review, Marc Thiessen: Impeachment over porn-star payoffs is just a liberal fantasy


It would be the height of hypocrisy if Democrats tried to remove the president over allegations of illegality relating to extramarital affairs. During the Monica Lewinsky scandal, congressional Democrats told us the private sexual conduct of a president does not matter, and that lying under oath to cover up a "consensual relationship" is not an impeachable offense.

Then-Rep. Charles E. Schumer, D-N.Y., said President Bill Clinton's lies under oath about his sexual relationship with a White House intern might have been illegal, but declared the scandal "a tawdry but not impeachable affair" -- right before heading off to a fundraiser with Clinton. At the time, Rep. Nancy Pelosi, D-Calif., declared that the Starr investigation "vindicates President Clinton in the conduct of his public life because we're only left with this personal stuff" and that Founding Fathers "would say it was not for the investigation of a president's personal life that we risked our life, our liberty, and our sacred honor."

But now that a Republican president is accused of covering up an affair, suddenly Democrats are channeling their inner Kenneth W. Starr.

Whatever you think of Democrats, don't accuse them of foolish consistency.

And if all that wasn't enough, and you still have more coffee to sip: CNN Caught Lying About RussiaGate & Won’t Retract Jimmy Dore Show