Russiagate in the Rain

The first full day of fall begins with rain. Not that we needed more. Anybody need rain? I'll email some to you. Anyway, the repercussions of Rod Rosensteingate are just begun; Mark Penn at the Hill: Donald Trump’s Rosenstein dilemma

People bristle when I sometimes adopt and use that term: “deep state.” But as an outside observer, watching the unmasking of the actions of one official after another at the FBI, CIA and DOJ, I have come to accept that an unelected group of well-educated, experienced individuals running these departments became inebriated with their own power during the last election campaign and apparently came to believe they were on a mission to stop, defeat or remove President Trump and his associates for crimes they would find or, if necessary, manufacture.

Perhaps Rosenstein was joking when he referenced the 25th Amendment, as another meeting participant reports. But Rosenstein’s statement in response to the news accounts carefully avoids denying having discussed wiring himself or others in some effort to entrap Trump. This cabal is meeting and planning, post-Comey’s firing, despite the fact that Rosenstein himself in his memo to President Trump said Comey was “wrong” and the FBI could not regain lost public trust without a new director who understood his errors.

It seems Rosenstein also may have believed we needed a new president. Just days into his expanded role and after these conversations, he appointed Robert Mueller as special counsel with a still-secret charter to investigate the Trump campaign and administration; the precipitating act was the very firing he recommended. 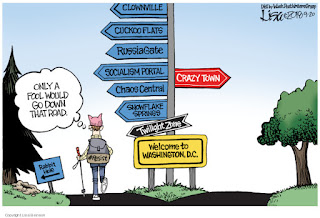 The ‘deep state’ leaves Trump with no good options

Michael Goodwin at the NYP:


At any rate, the idea that Rosenstein serves at the pleasure of the president now takes on an extra dimension. Trump recently called their relationship “fantastic,” though his Friday reference to a “lingering stench” almost certainly refers to the deputy attorney general.

Whether the plot revelation will be the end of Rosenstein is a guessing game. The advantages of keeping him, at least for now, involve calculations about what impact a firing would have on the midterms and the Mueller probe.

In addition, somebody would have to replace Rosenstein, and that’s not a battle Trump needs now, especially with Kavanaugh’s Supreme Court nomination ­unresolved.

On the other hand, Senate Minority Leader Chuck Schumer warned Trump Friday not to fire Rosenstein. In the political hall of mirrors, that could mean Schumer actually wants Trump to fire him so Dems would have fresh campaign fodder.

Thus, the president has no great option, only two bad ones. Keep the man who wanted to entrap and remove you, or fire him and bring on more trouble than you can handle.

Welcome to the snake pit.


“Trump is gonna go on a jihad,” one former senior White House official told The Daily Beast. The official speculated that Rosenstein’s comments were leaked with just that reaction in mind. “The NYT op-ed gave an opportunity to really drive home the deep state stuff. With this new story, it gives additional credibility.”

Don't fire them. Make 'em so miserable they beg to leave.

"Another reason I suspect this ROSENSTEIN story Whatever your opinions on Rod, he's a super smart lawyer and knows the law inside out (and hi […]" #MAGA


Another reason I suspect this ROSENSTEIN story

Whatever your opinions on Rod, he's a super smart lawyer and knows the law inside out (and his memo taking down @Comey is still right to this day)

RR really thought the 25th Amendment could take down @realDonaldTrump?

The 25th Amendment is designed to allow the cabinet to take the hands of the presidency away from someone like Woodrow Wilson, lying in a coma, with his administration being run by his wife. The amendment permits the President to resume the presidency by writing a letter to Congress to prove his physical ability to do the job. It can be only overruled by a 2/3ds vote in both houses of Congress. Highly unlikely.  The real suspect? House Judiciary Committee Plans to Subpoena McCabe Memos Outlined in New York Times Reporting…. The insurance plan? 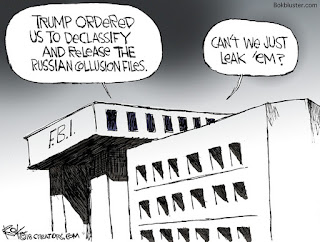 
So what happened in the past 48 hours to change the President’s mind or at least slow him down? I think we can rule out any concerns about a “perceived negative impact on the Russia probe.” In fact, that one is just laughable. If anything, a negative impact on the Russia investigation would probably just speed the documents out the door. Nobody seems to have much insight on this yet, but let’s just put out a couple guesses, shall we?

One possibility might be that Trump’s finally had a look at the documents himself and doesn’t find them as helpful as he’d been told. Keep in mind that as recently as Tuesday the President admitted he hadn’t even read them himself. He’s been taking the word of senior members like Devin Nunes, who really want those documents out in the public’s eye. If Trump’s legal team looked them over and found them less than helpful (or potentially even hurting his cause?) he might want to slow this train down.

Alternatively, I suppose it’s possible that some foreign allies weighed in and begged him to keep a lid on it. But who? Theresa May? Macron? Is there any way that their governments had their fingers in the pie when the Steele dossier was being shopped around and they don’t want that connection exposed? But since when has Donald Trump worried overly much about stepping on the toes of foreign leaders? Anything’s possible I suppose, but that line doesn’t sound very realistic.

Trump is leaving himself the option of releasing them “later” but that’s not usually his style. If he was ready to go with the disclosure and then put the whole operation on hold overnight, I’m willing to bet there’s something in there which wouldn’t play in his favor. And if that’s the case, “later” may turn out to be never.

I've allowed for the possibility that the FISA warrants don't contain bombshells. What they probably chiefly contain is holes; places where the FBI failed to add evidence in favor of Carter Page. They probably also contain evidence that the UK and Australian government conspired with the FBI and CIA to entrap Trump campaign officials into appearing to collude with Russians. I really want to know the background on the Mysterious Mr. Mifsud's involvement; it's pretty clear Halper was a plant. Unfortunately, my guess is that those are among the holes in the FISA warrant. Put 'em out; if it hurts the UK and Australians, too bad, they shouldn't be meddling in our politics anyway.

Robert Mueller has been held over President Trump’s head like a sword of Damocles for more than a year. The DOJ has just handed President Trump leverage over Mueller (which POTUS can use to protect his office – Trump now controls the horsehair), in exchange for not exposing the institutional corruption within the FBI and DOJ.

Leverage over Mueller is worth withdrawing the declassification directive in exchange for allowing the FBI and DOJ to manage how the institutional corruption surfaces.

Court grapples with case that could impact release of Mueller report - The case could close off some options Mueller may have to release a public report or to transmit one to Congress.


The case — heard by the U.S. Court of Appeals for the D.C. Circuit Friday morning — has no direct connection to Mueller's investigation, but centers on issues of grand jury secrecy and when judges have the power to disclose information gathered through that process.

A ruling that judges lack that power could close off some options Mueller may have to release a public report or to transmit one to Congress.

The three-judge panel issued no immediate decision and gave no definitive indication of where the court will come out, but one of the judges — Greg Katsas — seemed to favor a reading of court rules that would require judges to strictly enforce secrecy.

The dispute before the court Friday involves a request for access to a grand jury investigation into the 1956 disappearance of Columbia University lecturer Jesus Galindez. There are indications that Galindez, a political activist, was kidnapped from New York, taken to the Dominican Republic and murdered. Some have long suspected the involvement of the CIA in either the murder or a cover-up.