Not so much this Labor Sunday. First off, from WaPoo: Don’t be so sure Mueller will back off before midterms. I can't say I expect him to. The Deep State is very upset about Trump, and Mueller is a Deep State man. I fully expect him to try an October surprise. But what's not surprising is the "Republicans seize" tone of the article:


Mueller, on the other hand, is in something of a no-win situation. Either course — taking new action or holding back and depriving the electorate of additional information — may be criticized by partisans as potentially affecting the election. Given that reality, he may conclude the wisest course is simply to lay low for the next two months to avoid giving the president’s team additional ammunition. But if he does, it will be because he chooses to, not because it is required — and in the end all it means is a slight delay. Come Nov. 7, all bets are off.

And speaking of Big Bob's Deep State connection,  Robert Mueller now allegedly connected to bribery scandal involving Clintons (James Lyttle, Da Wire). But to be fair, who isn't connected to a Clinton scandal. They're like Kevin Bacon, the closer you are to the top of the heap, the more likely you are to be close to it.

Today we cue up another brutally obvious example of media collaboration to protect their own interests, where we see the New York Times attempt to engineer yet another narrative and hide a reality that DOJ and FBI officials were conspiring with Russians: 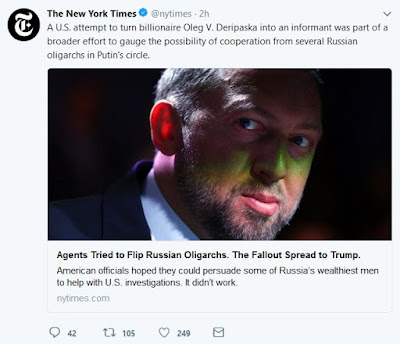 The New York Times article is a long diatribe trying to justify connections, meetings, contacts, actions, text messages and emails between DOJ and FBI officials and people who were representing Oleg Deripaska.

The reality is that Christopher Steele was working for Oleg Deripaska, and Deripaska provided material, ridiculous material like hookers, pee-tapes etc, that Steele -while working in collaboration with Bruce Ohr’s wife Nellie Ohr- put into his silly dossier and gave to the FBI….. who then used that nonsense to gain a surveillance warrant against the Trump campaign. That’s Oleg’s REAL STORY.

Yes, the DOJ/FBI were using Russian-originated propaganda to create a ridiculous false optic that Trump was engaged with Russians during the 2016 election.

Josh Gerstein at Politico: Papadopoulos lawyers ask for no prison time for lying to FBI amid Russia probe. Doesn't everyone hope for no prison time? Anyway, Papadop's mistake was talking to the FBI at all. Never talk to the FBI, at the very least without representation, which Papadop didn't. If you don't talk to them, they can't set up a perjury trap.

Roger Stone celebrates another day without indictment (that we know of) Roger Stone tells Herald: 'The only thing I’m guilty of is supporting Donald Trump' - Robert Mueller lets day pass with no indictment, Joe Dwinell at the Boston Herald.

According to HuffPo, Jeff Sessions Is Trump’s Most Effective Cabinet Member. He May Fire Him Anyway. Sleepy Jeff is a mixed bag in my view, he's done a lot of things right, but a lot of things wrong. I wouldn't be sad to see him go. One thing he's not doing, as far as I know: Memo to President Trump: Prosecute Hillary Clinton or Perish, Cliff Nichols at Town Hall.

Dan Balz of WaPo, defeating the paywall through the Loredo Morning Times: Impeachment talk has perils for both parties. What? A journolist admitting ignorance. He should bury this!
Posted by Fritz at 9:15 AM