Reason #6665 That Trump Was Elected

Hot Air: Yale Study: There Are Probably Twice As Many Illegal Immigrants Living In America As Commonly Believed


How many illegal immigrants are currently living in the U.S.? The number often used when discussing the topic is around 11 million. For instance, last year Pew Research published “5 facts about illegal immigration in the U.S.” which states, “The Center’s preliminary estimate of the unauthorized immigrant population in 2016 is 11.3 million.” But according to a newly published study by Yale University, the actual number may be double that or possibly even higher:


Immigration is the focus of fierce political and policy debate in the United States. Among the most contentious issues is how the country should address undocumented immigrants. Like a tornado that won’t dissipate, arguments have spun around and around for years. At the center lies a fairly stable and largely unquestioned number: 11.3 million undocumented immigrants residing in the U.S. But a paper by three Yale-affiliated researchers suggests all the perceptions and arguments based on that number may have a faulty foundation; the actual population of undocumented immigrants residing in the country is much larger than that, perhaps twice as high, and has been underestimated for decades.
Using mathematical modeling on a range of demographic and immigration operations data, the researchers estimate there are 22.1 million undocumented immigrants in the United States. Even using parameters intentionally aimed at producing an extremely conservative estimate, they found a population of 16.7 million undocumented immigrants…
The approach in the new research was based on operational data, such as deportations and visa overstays, and demographic data, including death rates and immigration rates. “We combined these data using a demographic model that follows a very simple logic,” Kaplan says. “The population today is equal to the initial population plus everyone who came in minus everyone who went out. It’s that simple.”
While the logic is simple—tally the inflows and outflows over time—actually gathering, assessing, and inserting the data appropriately into a mathematical model isn’t at all simple. Because there is significant uncertainty, the results are presented as a range. After running 1,000,000 simulations of the model, the researchers’ 95% probability range is 16 million to 29 million, with 22.1 million as the mean.

Here’s a graph produced as part of the study: 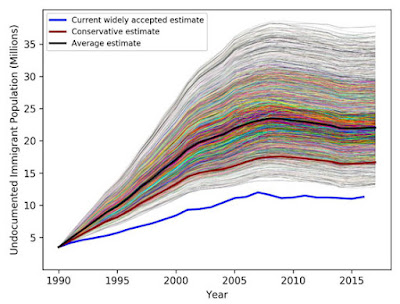 The authors were surprised by the results. They actually expected their numbers would come in slightly lower than the accept data, but as you can see, the accepted number (the blue line) is so low that it’s not even a possible lower estimate based on their study.

One thing the authors point to is that their model using a very different approach has the same basic trajectory as the standard model. In other words, there’s a big influx between 1990 and 2008 followed by a dip and a fairly flat line. They took this as an indication that their model was seeing the same trends, just not the same numbers.

What does this mean for immigration policy? The authors suggest it may have an impact on estimates of crime among the immigrant population, i.e. if we’ve had the denominator wrong when analyzing crime data then the actual amount of crime committed by immigrants may be much lower than we thought it was.

On the other hand, the change could also have an impact on estimates of how immigrants impact the availability of low-wage work. If there are twice as many people taking those jobs as previously thought, that leaves a lot less room for Americans looking for similar jobs.

It also means that there maybe twice as many illegal ballots cast in our elections.

Problems? It's a model, not actual data, although the approach (in biogeochemistry we would call it a mass balance approach) is different than the current  accepted guesstimate which suffers the same problem, trying to add and subtract unknown numbers from each other.

Over at William Teach's Pirate's Cove it's another Sorta Blogless Sunday Pinup and links.
Posted by Fritz at 1:51 PM