Russiagate - Is Rosenstein In or Out?

From Politico: Trumpworld divided on Rosenstein — not whether to fire him, but when

“It is clear the president has all the justifications he needs to find a replacement for Rod Rosenstein, and we’ve talked about this almost every day of his presidency,” Matt Schlapp, the pro-Trump president of the Conservative Political Action Conference, said in an interview on Saturday. “I do not think there would be negative political consequences to making staff changes at DOJ, like the deputy.” Schlapp’s wife, Mercedes, works in the White House as a top communications adviser.

On Saturday, the White House had yet to issue any official response to the Rosenstein story, and Trump had yet to weigh in on Twitter as the world around him tried to sway his opinion on what to do.

The Dersh:  Dershowitz: Trump's lawyers could force Rosenstein to recuse himself from Mueller probe


For the good of your country, Rod Rosenstein, step down.

If you have a shred of integrity left in you, if you still care about the law and justice as much as you claim, if you still hold to your oath, then quit your position as deputy attorney general of the United States.

It is now clear that you are a fierce partisan working at the highest levels of the Department of Justice.

The notion that someone in your powerful — yet unelected — position would scheme inside the highest levels of the federal government to take out a duly elected sitting United States president is stunning.

Hatching plots to wiretap the Oval Office or invoke a constitutional revolt against a sitting president sounds like a marvelous thriller on Netflix. In real life, it is treasonous.

Even if you were joking about wearing a wire into the Oval Office — still looking for the humor in that one — it reveals how wildly distorted your view of the executive branch has become and far you have fallen since first vowing to uphold the Constitution.

At the Hill: Pompeo on Rosenstein bombshell: Maybe you just ought to find something else to do if you can't be on the team


"I’ve been pretty clear since my beginning of service here in this administration," Pompeo told "Fox News Sunday" when asked about a report that Deputy Attorney General Rod Rosenstein proposed secretly recording conversations with Trump and discussed the possibility of removing him.

"If you can’t be on the team, if you’re not supporting this mission, maybe you’ve got something else to do."

Pompeo added that he's carried this message to junior and senior colleagues of his in the State Department, CIA and FBI, saying that the Trump administration needs everyone "engaged" in the president's mission.

"If you’re not, you should take this time to do something more productive," he said. 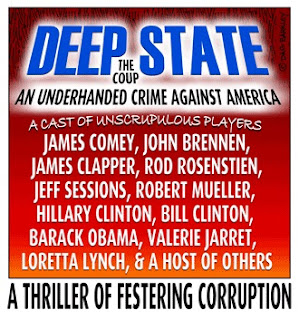 Jed Babbins at the American Spectator: The Lingering Stench of Coverup at Justice and the FBI "But why did President Trump cancel his declassification order?"


When Trump canceled his declassification order, his Tweeted explanation was that he’d met with DoJ and that they’d agreed to follow his order but the release of the documents would have a “perceived negative impact” on Special Counsel Robert Mueller’s investigation. He added that key allies — note the plural — had called asking him not to declassify the documents.

Stop right there. Rosenstein — who appointed Mueller to be special counsel — is supposedly the DoJ official supervising the Mueller investigation. Why — when the president is convinced that the Muller investigation is a witch hunt — would he be concerned about a negative perception on the documents’ declassification? Why would he trust Rosenstein’s advice, especially after the NYT report?

Many of us have been, for almost a year, saying that the president should order all of these documents — and all the rest that Nunes and HPSCI have asked for — to be declassified. Unless the president is terrified of what the Democrats would say about the declassification, there’s no logical reason for him to cancel his order.

Stop again. Between Monday’s order and Friday’s cancellation of the declassification order, Rosenstein — or others whose wrongful actions would be exposed — had plenty of time to talk to “key allies” to get them to call Trump to ask him to not declassify the documents. You can bet the farm that the calls from “key allies” — probably Britain and Australia — told Trump that they’d be less willing to share intelligence with us if their involvement in the Steele dossier mess were exposed.

The “less willing to share intelligence” argument is boilerplate in the intelligence community. It’s the first argument against any disclosure, and it’s usually, not always, false. The intelligence sharing with our allies is never automatic or complete. That’s why we have the “NOFORN” — i.e., no dissemination to foreign governments — designation on a great deal of our intelligence and intelligence analysis. They have similar limitations on what they tell us.

Honestly? I'm praying he's saving it for an October surprise. Or even early November, given people's current attention spans and the speed of the media cycle. And maybe give some time for the UK and Australia to rein in their activities against him. Nunes: Where Are the Declassified Documents?! Trump: DOJ-OIG Is Reviewing Them First. Reviewing needs to be in scare quotes. What they're doing is desperately seeking some excuse to redact the most embarrassing items.

Unfortunately, this is generally be true: Caligula's Horse Was a Better Senator. At least a true horse's ass would not do much damage.