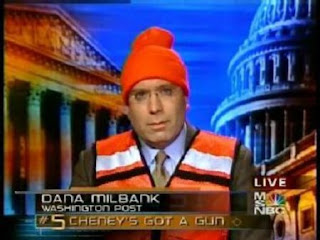 Dana Milbank is the most reliable liberal hack at the Washington Post, and even he is getting tired of defending Hillary: Clinton the inauthentic while composing a pretty well linked list of the problems.

. . .As The Post has documented, the Clintons’ charitable efforts have been closely tied to the considerable fortune they amassed for themselves. Bill Clinton was paid at least $26 million in speaking fees by entities that were major donors to the foundation. The foundation has also been good for the balance sheets of Clinton friends such as Sidney Blumenthal, who received about $10,000 a month from the foundation while providing his thoughts on Libya to then-Secretary Clinton.

The vast array of contributors to the foundation (and those who paid the Clintons to give speeches) gives endless material to critics, and to the media: the uranium mining company that funneled money to the foundation while it had business before the State Department; the State arms-sale approvals for foundation contributors; the scores of foundation donors who lobbied State; the Canadian affiliate of the foundation that didn’t disclose its donors; the Keystone XL pipeline bankers who paid the Clintons to speak; the fees charged to a charity for tsunami victims; the use of an unreported pass-through company; Hillary Clinton’s brother’s ties to a Haitian gold mine; the money from countries with poor human-rights records; and contributions to the foundation from Qatar while Bill Clinton gave a boost to its controversial World Cup bid.

The Clintons’ defenders will say none of this is illegal, and that may be so. The problem is appearance. Clinton can talk all she wants about income inequality and reducing the influence of money in politics, but her recent experience makes her seem insincere.

The Clinton ‘Charity’ Begins at Home. Employment rolls for the Clinton Foundation show scads of political operatives—but this doesn’t seem to bother the IRS.


The scandal of the century at the IRS was that agency’s secret targeting of conservative nonprofits. Perhaps a close second is the scandal of what the IRS hasn’t been investigating: the Clinton Foundation.

The media’s focus is on Hillary Clinton’s time as secretary of state, and whether she took official actions to benefit her family’s global charity. But the mistake is starting from the premise that the Clinton Foundation is a “charity.” What’s clear by now is that this family enterprise was set up as a global shakedown operation, designed to finance and nurture the Clintons’ continued political ambitions. It’s a Hillary super PAC that throws in the occasional good deed.

That much is made obvious by looking at the foundation’s employment rolls. Most charities are staffed by folks who have spent a lifetime in nonprofits, writing grants or doing overseas field work. The Clinton Foundation is staffed by political operatives. It has been basically a parking lot for Clinton campaign workers—a comfy place to draw a big check as they geared up for Hillary’s presidential run.

The revolving door is spinning quickly these days. There’s Dennis Cheng, a finance director for Mrs. Clinton’s 2008 bid, who went to the Clinton Foundation as its chief development officer. There he built a giant donor file, which he earlier this year took with him to head up fundraising for the Clinton 2016 campaign. There’s Katie Dowd, who raised $100 million as Mrs. Clinton’s new media director in 2008, then went to a Clinton PAC, then to the State Department, then to the foundation as a “tech adviser.” She’s now at Clinton 2016 as digital director.

Some operatives don’t even bother feigning separation. Longtime aide Cheryl Mills served as general counsel to Mrs. Clinton’s 2008 campaign, then worked at State. She then joined the board of directors of the foundation and remains on it still, even as she works on Clinton 2016. Nick Merrill, an aide to Mrs. Clinton at State, has continued on as her press liaison. Last year his name popped up on a news release as a contact person for the Clinton Foundation. Mr. Merrill will be a campaign spokesman for Clinton 2016.

Maura Pally was until recently the acting CEO of the Clinton Foundation. Her training for this important job was working as a lawyer in the Clinton White House, as a counsel to Hillary 2008, and in cultural affairs at the State Department. Valerie Alexander is the foundation’s chief marketing officer, and the woman responsible for turning the outfit into a Clinton PR machine. She worked as a senior communications adviser for Hillary 2008.

Amitabh Desai is the foundation’s foreign policy director. He was a legislative aide to Sen. Hillary Clinton. Craig Minassian is the foundation’s chief communications officer. He worked on Hillary 2008. Ira Magaziner is CEO of the Clinton Health Care Access Initiative. He is one of the Clintons’ oldest advisers. Bari Lurie, chief of staff to Chelsea Clinton, worked on Hillary’s Senate campaign and her 2008 run, and for her PAC. Erika Gudmundson is the foundation’s deputy director of communications initiatives. She was a press aide for Hillary 2008. You get the point.

The question isn’t how or whether these folks will help with Clinton 2016, but when and in what capacity. Ditto more than a dozen other staffers at the foundation who lack long histories with Clinton but who came straight out of politics—either working for the Democratic National Committee, other politicians or super PACS.

The other question is how many more operatives are cashing foundation checks that we don’t know about—as “consultants” for the group. We now know longtime Clinton pal Sid Blumenthal drew $10,000 a month. For what?

That is what is known as a rhetorical question. Of course, they're there to promote Hillary's presidential prospects. None of that should be allowed to be supported under a tax free organization under the current rules. However, the purpose of those campaign finance rules, at least in the minds of progressives, was to limit conservatives while giving their side free rein. IRS delenda est. 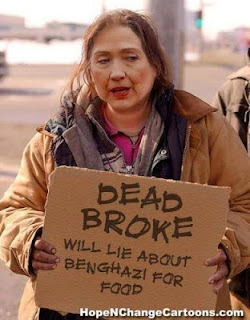 
I'm talking about Hillary Clinton and beating the dead horse of the lack of a permanent Inspector General at the State Department during her entire tenure there.

It was six weeks ago that I started off a post here with these words:


This is probably not as well-known or oft talked about as it should be: during the period in which Hillary Clinton served as Secretary of State, at no time was a permanent, Senate-confirmed Inspector General in place.

Away we go again.

In her testimony at today's Senate hearing (.pdf), Danielle Brian from the Project On Government Oversight (POGO) recounted the situation with the State Department IG position during Obama's presidency. The position was vacant when he entered office after the former IG stepped down in the last year of Bush's presidency amid controversy.

Obama, however, was in no rush to fill that vacancy, despite concerns surrounding the acting IG. From Ms. Brian's testimony:


In 2010, POGO raised concerns about the relationship between [acting IG Howard] Geisel, a former ambassador and long-time member of the diplomatic corps, and State’s Under Secretary for Management, Patrick Kennedy. ... Despite Geisel’s assurances that his office’s work was not affected by his ties to an agency official, numerous whistleblowers from the State Department had come to POGO “due to a perception within the Department that employees with knowledge of wrongdoing cannot go to the OIG because they believe it to be captured by management.”

You know what they say - and by "they" I mean the Obama administration and by "say" I mean in hushed tones away from public consumption - Stifling Dissent is the Highest Form of Patriotism.
. . .
Now just imagine what Hillary could get away with if she were elected President and effectively had no boss.

Well. You can rest assured that Hillary has spent her entire adult lifetime imagining that very thing.

Transparent windows are useless when there is no light to see by. Don't turn on the lights 'cause we don't want to see!