Who's On the Money?

To help the Hillary Clinton presidential campaign, the administration recently announced it's plans to replace Alexander Hamilton on the $10 bill with A Woman To Be Named Later (AWTBNL). You have to wonder about how well thought out a plan it is if they can't really identify the woman they want to honor yet. It sort of makes you think confirms that it's strictly a political ploy

Semi-serious recommendations for choices of AWTBNL have been failed coin images Susan B. Anthony and Sacajawea, or Harriet Tubman, mistress of the Underground Railroad. While I have no great objection to any of these, the first two are rather severe in appearance, and Sacajawea's appearance is not well known, although most representations of her are fairly flattering.

Another suggestion, made by the Washington Free Beacon, is Kate Upton:


Kate Upton is a true triple threat and emblematic of the best America has to offer. Obviously, she deserves a place on some item of American currency. Why not the ten?

But, frankly, this doesn’t go far enough. If we’re monkeying around with the currency, why not make some real changes? Why settle for such a little portrait?
. . .
Don’t f—k this up, Obama Administration.

I particularly appreciate this  suggestion if they use a holographic "moving picture image". There are several I might suggest.

However, it is generally recognized that one of the requirements for being considered appropriate fodder for having their image on currency is that they be dead. This is to prevent cat fights between Nancy Pelosi, Michele Obama and Hillary Clinton. Fortunately for us, and Kate Upton, she also fails miserably on this count.

But I do have a candidate in mind that I have not seen suggested who I think would be both attractive, and appropriate - Hedy Lamarr: 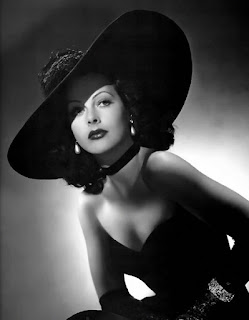 At the beginning of the war, she was told that she could better help the war effort by using her celebrity status to sell War Bonds, which she did with great success. But she wanted to do more, particularly by using her interest in science to aid in the defeat of Nazism. This desire only intensified as Hitler continued his relentless attacks on Europe. When German submarines began torpedoing passenger liners, she said at one point, "I've got to invent something that will put a stop to that." This desire would give rise to the invention for which she would become famous many years later.

That picture would be just perfect, don't you think?


On 11 August 1942, U.S. Patent 2,292,387 was granted to Hedy Kiesler Markey, Lamarr's married name at the time, and George Antheil. This early version of frequency hopping, although novel, soon was met with opposition from the U.S. Navy and was not adopted. The idea was not implemented in the U.S. until 1962, when it was used by U.S. military ships during a blockade of Cuba after the patent had expired. Lamarr's work was honored in 1997, when the Electronic Frontier Foundation gave her a belated award for her contributions. In 1998, an Ottawa wireless technology developer, Wi-LAN Inc., acquired a 49% claim to the patent from Lamarr for an undisclosed amount of stock. 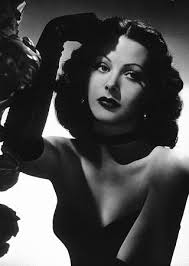 Lamarr's and Antheil's frequency-hopping idea served as a basis for modern spread-spectrum communication technology, such as Bluetooth, COFDM (used in Wi-Fi network connections), and CDMA (used in some cordless and wireless telephones). Blackwell, Martin, and Vernam's 1920 patent seems to lay the communications groundwork for Lamarr and Antheil's patent, which employed the techniques in the autonomous control of torpedoes.

The rest of her life was even more incredible:


In the late 1920s, Lamarr was discovered as an actress and brought to Berlin by producer Max Reinhardt. Following her training in the theater, she returned to Vienna where she began to work in the film industry, first as a script girl, and soon as an actress.

In early 1933, at age 18, she starred in Gustav Machatý's film, Ecstasy (Extase in German and Czech), which was filmed in Prague, Czechoslovakia. Lamarr’s role was that of a neglected young wife married to an indifferent older man. The film became notorious for showing Lamarr's face in the throes of orgasm as well as close-up and brief nude scenes in which she is seen swimming and running through the woods. 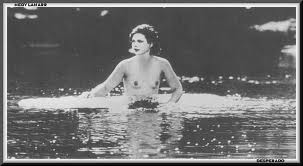 
In 1933 she married Friedrich Mandl, a wealthy Austrian military arms merchant. He objected to what he felt was exploitation of his wife and "the expression on her face" during the simulated orgasm. He purportedly bought up as many copies ofEcstasy as he could find in an attempt to restrict its public viewing. In her autobiography, she insists that all sexual activity in the film was simulated, and the orgasm was achieved using "method acting reality". The authenticity of passion was attained by the film director's off-screen manipulation of a safety pin strategically poking her bottom. Lamarr had married Mandl at the age of 19 on 10 August 1933. 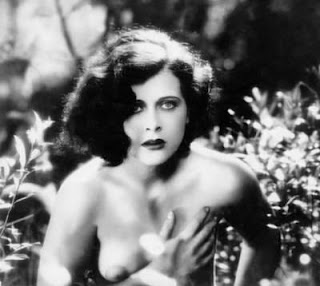 
Reputed to be the third richest man in Austria, Mandl was a munitions manufacturer. In her autobiography Ecstasy and Me, Lamarr described Mandl as extremely controlling, preventing her from pursuing her acting career and keeping her a virtual prisoner, confined to their castle home, Schloss Schwarzenau. Although half-Jewish himself, Mandl had close social and business ties to the fascist governments of Italy and Nazi Germany, selling munitions to Mussolini.

Lamarr wrote that Mussolini and Hitler had attended lavish parties hosted at the Mandl home. Mandl had her accompany him to business meetings, where he conferred with scientists and other professionals involved in military technology. These conferences were her introduction to the field of applied science and the ground that nurtured her latent talent in science.

Lamarr's marriage to Mandl eventually became unbearable, and she decided to separate herself from both him and her country. She wrote in her autobiography that she disguised herself as her maid and fled to Paris. However, rumors claimed that Lamarr persuaded Mandl to let her wear all of her jewelry for a dinner, then disappeared.

Germany's loss was our gain. She was an immigrant, but became a naturalized citizen in 1953 at age 38. But then, Alexander Hamilton was also an immigrant from the Caribbean.

Wombat-socho checks in with "Rule 5 Sunday: Force It".
Posted by Fritz at 6:00 AM