But only Koskinen, alas, and that probably won't happen either: 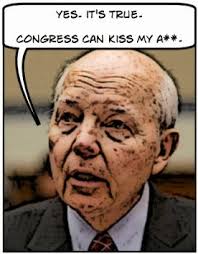 Agency destroyed e-mails after telling Congress they couldn’t be found.


House Republicans investigating the IRS’s targeting of tea-party groups are seriously considering an effort to impeach IRS commissioner John Koskinen or other agency employees for “culpable misdemeanors” pertaining to the destruction of e-mails written by Lois Lerner, the former official at the heart of the scandal.

“We’ve briefed the leadership’s counsel, and I think that they’re open to it, but it’s the type of thing where this town is like, ‘oh, that’s not how we do things, it’s not really been used lately,’” a Republican member of the House Oversight and Government Reform Committee says. “But, quite frankly, we really haven’t had executive branch officials behave this way like we do now.”

Lawmakers have been privately mulling the unconventional tactic for months, in part due to frustration that cutting the agency’s budget and holding Lerner in contempt of Congress failed to speed up the glacial pace at which the agency has produced documents requested by the committee. The ultimate decision depends on their ability to demonstrate that the IRS has obstructed the investigation — a public case that might begin Thursday, when the Treasury Department’s inspector general announces that IRS officials destroyed the files “most likely to have contained Lerner’s emails” after telling Congress they could not be found, according to a transcript of the IG’s forthcoming testimony to the Oversight Committee obtained by NR.
. . .
“It’s really a test of whether Congress is going to defend its institutional prerogatives,” the Oversight Committee member says. “If you have a situation where it’s fine for people to come misrepresent the facts, not produce documents, and just do that with impunity, then why are we even conducting oversight?” 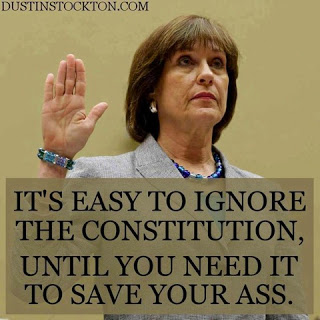 TIGTA: Lerner hard-drive crash likely due to “an impact of some sort”


What could happen in an IRS office on a Saturday evening to create “an impact of some sort” on a laptop hard drive? According to Lois Lerner, the computer mysteriously failed to operate when she returned to the office on Monday, June 13, 2011, but server data shows that the computer had been in communication with the office systems continuously until Saturday, June 11th, at least until 5 pm. The House Oversight Committee discovered this sequence of events from the Treasury’s Inspector General, whose testimony raises new questions about the hard drive failure that kept Congress from retrieving Lerner’s e-mails (via ATR):


Our investigation determined that on Saturday, June 11, 2011, between 5:00 pm and 7:00 pm, Ms. Lerner’s IRS issued laptop computer stopped communicating with the IRS server system. The IRS server system sends messages out to all of the network-connected computers every two hours. The last communication between Ms. Lerner’s laptop and the server system occurred around 5:00 pm, and at that time, based on consistent network reporting for more than a week, the laptop computer was likely located in Ms. Lerner’s office. The laptop failed to respond to the server at 7:00 pm.
On Monday, June 13, 2011, Ms. Lerner reported that she found her computer inoperable when she entered her office, and the malfunction was reported to the IRS Information Technology (IT) staff. The assigned IT specialist determined the hard drive had crashed, and following standard protocol, he placed a new hard drive in Ms. Lerner’s laptop. In addition to the hard drive, a Hewlett Packard (HP) contractor replaced the laptop’s keyboard, track pad, heat sink, and fan. When interviewed, both the IRS IT technician and the HP technician reported that they did not note any visible damage to the laptop computer itself. When asked about the possible cause of the hard drive failure, the HP technician opined that heat-related failures are not seen often, and based on the information provided to him, the hard drive more than likely crashed due to an impact of some sort. However, because the HP technician did not examine the hard drive as part of his work on the laptop, it could not be determined why it crashed.
On July 19, 2011, Ms. Lerner requested IRS IT to attempt to recover data from her crashed hard drive because, according to her, she had “personal information” on the drive. The IRS IT management agreed and requested assistance from the Internal Revenue Service Criminal Investigation Division (IRS-CI). After receiving the hard drive from the IT technician, the IRS-CI technician attempted, but was unsuccessful in recovering data, so he returned the hard drive to the IT depot at the IRS headquarters building for its ultimate destruction. According to the IRS-CI technician, he noted some scoring on the top platter of the drive, and he believed there were additional steps that could have been taken to attempt to recover data.

What a coincidence, Oversight chair Jason Chaffetz exclaims! If the time of the event is so narrowly deducible, why not take a look through the security data to see who came into the office that weekend? Well … not exactly, Deputy Inspector General for Investigations Tim Camus explains:

It's clear that the IRS has become, in many respects, an enforcement arm of the Democrat party. Only vigorous action by Republicans can alter that reality. Getting rid of Koskinen to demonstrate that they mean business is a start, but the real way to bureaucrats heart is through his wallet. Cut the budget of the IRS another 20% and strip away their perks and any non-tax collecting arms (like the tax-exempt group).
Posted by Fritz at 8:21 AM