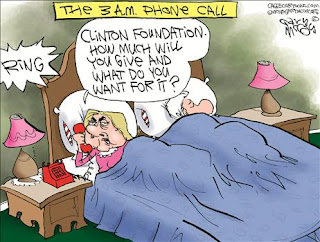 
Secretary of State Hillary Clinton used her personal email account to handle high level negotiations in 2011 for a no-fly zone to help topple Libyan dictator Muammar Qaddafi, according to a series of emails obtained by Fox News, challenging her claim the private server did not hold classified information.

The emails, linked here, conflict with Clinton's statement that she did not put national security at risk by using a personal account.

That claim was hard to test because emails released by the State Department are heavily blacked out. But an email chain from March 23, 2011 -- with virtually no redactions -- shows a message for senior administration staff including then Deputy National Security Adviser Denis McDonough, then-Under Secretary of State for Political Affairs William Burns, Under Secretary of Defense for Policy, Michele Flournoy among others. It goes point by point, explaining what Turkey, France and Britain will likely accept in the deal.
. . .
While the first email in the chain is marked "UNCLASSIFIED," based on his experience as ambassador to the UN, Bolton said he suspects a lot of intelligence was pushed out as unclassified to accommodate her separate, private system.

For some odd reason, I would expect that any email from a Secretary of State to any of the his/her subordinates about foreign policy matters would be routinely classified. But what do I know?

Actually, I'm kind of surprised that Hillary was really involved in matters of state; I always thought Obama gave her the job so she could pretend to build a resume, and left it up to the old guard at State to actually formulate and carry out policy. I'm sure it would have worked out at least slightly better. 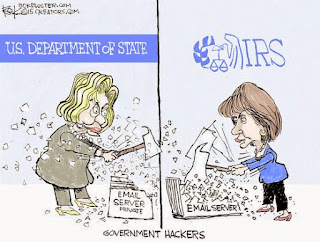 Gowdy: Blumenthal's Emails to Hillary Were Not Unsolicited


Representative Rep. Trey Gowdy (R-SC), Chairman of the House Select Committee on Benghazi, said that Hillary Clinton told Sidney Blumenthal to keep the emails to her coming and that this proves Blumenthal’s correspondence with Clinton was not “unsolicited” on Wednesday’s “America’s Newsroom” on the Fox News Channel.

Gowdy stated, “he [Blumenthal] was sending emails to Secretary Clinton far before the attack in Benghazi, all the way back to 2011. So, the whole lead-up to the attacks in Benghazi, Blumenthal was sending emails to Secretary Clinton that he never vetted, he doesn’t know anything about the sources. The memos were written by Tyler Drumheller, who may have had a financial interest. And anytime someone has a financial interest, then you need to look at the material, or their objective in the outcome, their interest in the outcome with scrutiny. She couldn’t do it and he couldn’t do it. So, how did they vet the information that was being passed on to our top diplomat?”

He added, regarding Clinton’s claims that the emails were “unsolicited,” “she and I have very different definition of the word ‘unsolicited.’ You’ll remember when she was asked, she said an old friend sent me unsolicited emails. Well, when you tell somebody to keep it coming or this is good stuff, or good work, then that tells me it wasn’t unsolicited. She flat out said ‘keep these coming.'”

And remember, Sid "Vicious" Blumenthal was in Hillary's employment, as a part time, $120,000 per year employee of the Bill, Hillary and Chelsea Clinton Foundation. When she say "keep these coming" she's not telling a friend "good job she's "telling an employee what to do. 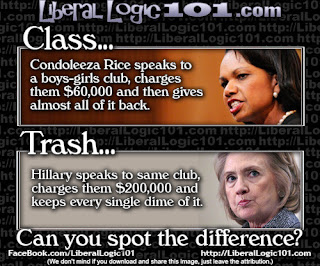 Hillary Clinton reportedly charged a Boys and Girls Club chapter $200,000 for an appearance, then left the premise without saying hello to children who benefit from the program.

The massive fee, which she donated back to her family foundation, was the largest the Long Beach, California, organization had ever paid a public figure for a speech, Politico reports.

By contrast, the club made $106,000 off the lunchtime, charity event – it’s lowest yield in 25 years. A contributing factor to the diminished proceeds: Clinton’s large entourage that took up seats that would have otherwise been sold to donors.

The details of the 2014 closed-press event were published in a Politico report today that cites a volunteer with the group as the source of the unflattering information.

Normally, speakers donate much of their honorariums back to the small, non-profit that has an annual operating budget of just $3 million.

Well, so much for the Clintons being normal.


The former secretary of state redirected her check to the Clinton Foundation, which raked in $262 million in 2013, according to a Washington Post assessment released earlier this year following the group’s latest disclosures.

Hey, it takes a steady flow of cash to pay Bubba's bills and provide Sid "Vicious" Blumenthal with a big travel budget for his Libya "investments."


That compares to former Secretary of State Condolezza Rice, the 2009 guest, who asked for $60,000, most of which she donated back to the Boys and Girls Club.

Her event, which was open press, reportedly raised more than twice as much, $258,000, as Hillary Clinton’s did. And she arrived early to tour the club’s facilities and meet with disadvantaged youth who participate in the program.