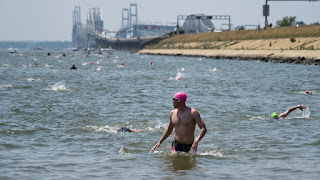 645 people swim across the Chesapeake Bay:


An estimated 645 swimmers from across the country attempted the 4.4 swim from Sandy Point Beach to a small beach on Kent Island, near the foot of the eastbound span of the Chesapeake Bay Bridge. To reach the beach, they swam beneath the bridge spans. A couple people were treated for heat exhaustion, but didn't require hospitalization, said race Director Chuck Nabit.

The race this year started at 12:30 p.m., which was later than usual because of the timing of slack tide, which is the safest time of day for the swimmers to cross, officials said.
. . .
All swimmers were monitored dozens of boats, including vessels from the U.S. Coast Guard and the Anne Arundel County Fire Department.

Kayakers served as waterway shepherds, surrounding the swimmers on both sides of the course beneath the bridge spans.

I wonder what they do about the big ships that come through on the way to Baltimore?
Posted by Fritz at 7:40 PM