All the News That's Fit to Bare 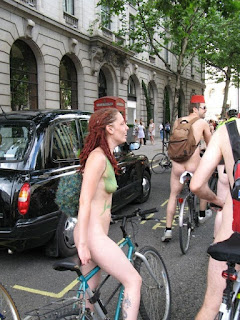 Announcing the World Naked Bike Ride! Why? Do we need a reason?


“The Auckland World Naked Bike Ride’s purpose was to draw attention to oil dependency and the negative social and environmental impacts of a car dominated culture. Last year 250 Aucklanders were killed by vehicle emissions, and 94 people died in car accidents on the roads of Auckland alone”

Going only half as far: Female Nipples Are Causing An Internet Storm & Here’s Why (Nudity) #FreeTheNipple 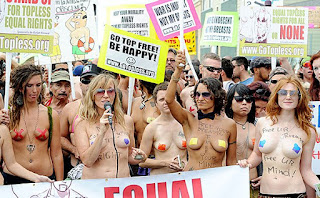 What is the deal with women’s nipples? Why does our society act as though they are these coveted, mystical things that should only come out in the bedroom? I mean, the main purpose of female nipples is to provide a passage of breast milk to babies and create a bond between mother and child. Male nipples, on the other hand, virtually serve no purpose whatsoever, and they are freely exposed on the Internet and in public places. 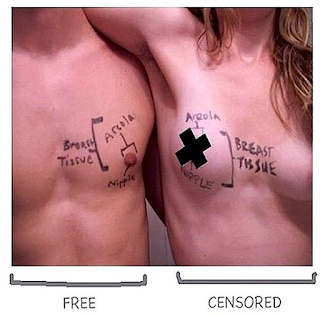 It's their very worthlessness that makes them freely exposable.


Why exactly is it okay for men to have their nipples exposed, yet women – even those who are breastfeeding – are often scoffed at and looked down upon? Not to mention the fact that we are constantly exposed to extremely sexual, provocative advertisements of women, yet a nipple is not allowed to be shown on Instagram. Why are we keeping female nipples hidden, is there an agenda behind this?

So, in a massive attempt to drive social change and gender equality, nipples are being revealed, on the Internet!

No, not the internet! Really? I've never heard of such a thing before! 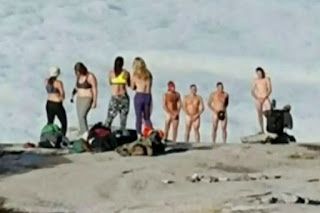 British climber Eleanor Hawkins is facing three months in prison after being accused of causing an earthquake by 'stripping naked' on a sacred Malaysian mountain, Mirror Online can reveal.

This morning we revealed that the tourist was arrested by police who claimed she was part of a group of 10 Westerners stripping off the 4,000 metre tall Mount Kinabalu on May 30.

Six days later the country saw one of the biggest earthquakes in decades kill at least 16 people and locals blame the nude tourists for 'offending the mountain god'. 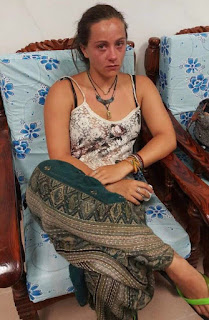 Those mountain gods have no sense of humor.


Speaking to the Mirror, Eleanor's lawyer Ronny Cham said she is "a bit traumatised" but is "okay because she is being looked after by the British consulate."

The 23-year-old, from Derby, was apprehended by police yesterday at Tawau airport after trying to board a plane to Kuala Lumpur, officials said. She appeared in court this morning alongside three other defendants, two Canadians and one Dutch national.

She's not looking too happy about now. 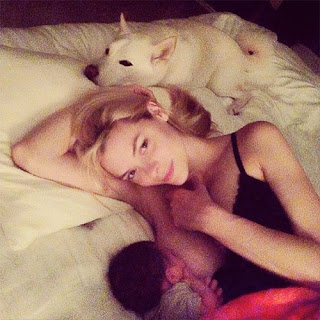 And talk about your uptight censors, how about Los Angeles International Airport? New Mom Allegedly Asked To Use Janitor’s Closet To Pump Breast Milk At LAX


An Austin woman says she ended up in a janitor’s closet at LAX after she couldn’t find anywhere else to pump her breast milk.

There is a new law requiring airport nursing rooms by January 2016. But so far, there is only one open and ready at LAX.

But new mother Haley Picchini, who shared with CBS2/KCAL9 pictures from inside the crowded, messy janitor’s closet where she says she pumped breast milk before boarding a flight, says mothers shouldn’t have to wait.

“I was mortified,” she said. “I was scared. I didn’t want to do anything that would endanger my baby.”

Picchini said both on the day she arrived and when she left she tried to find a place to pump. Signs directing her to a mothers’ area seemed to lead nowhere; one worker said there was a nursing room in Terminal 7, another thought Terminal 6 and another suggested finding a less busy area in between terminals.

“That’s like someone telling you that you should sit and have a bowel movement, covered of course, in the middle of two gates where people can see you,” Picchini said.

I have no problem with breast feeding (or pumping) in public; IIRC both of our kids were probably breastfed in LAX,  but if it bothers you to do it, you should probably factor that into your travel plans.

Linked by William Teach at Pirate's Cove in the weekly "Sorta Blogless Sunday Pinup." Wombat-socho checks in from the heat of Las Vegas with "Rule 5 Sunday: Showgirls and Other Attractions."
Posted by Fritz at 6:00 AM