SHARK Focusing on the Big Issues

Dozens took part in the first Patuxent River Battle of the Rays on June 13 in Mechanicsville, Maryland, on the tributary of the Chesapeake Bay.

“What happened to these pregnant animals was truly horrifying,” said SHARK’s Stuart Chaifetz. “Contestants showed a complete disregard for life and caused incredible pain and suffering to these innocent animals.”

Chaifetz doesn’t want there to be a second Battle.

“We are calling on Maryland Governor Larry Hogan to take immediate action to stop these despicable and heinous tournaments from ever happening again.”

The cownose ray is a brown, kite-shaped ray with a long, whip-like tail that visits the Cheapeake Bay’s shallow waters in summer, according to the Chesapeake Bay Program. 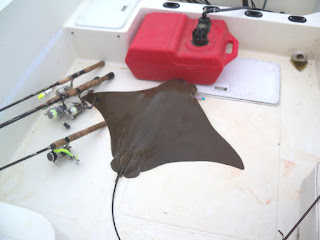 The Cownose Rays are one of the features of Chesapeake summer. Large, powerful, and not particularly good eating, they are a bane to fisherman. Hooking one, especially on light tackle, feels like hooking a freight train. If you do succeed in fighting one back to the boat, the next question is what to do with it. If you're lucky, you might be able to get your terminal tackle loose without getting stung (yes, they are a sting-ray, with a nasty poison spine at the base of the tail) without lifting it into to boat, but in most cases it's simply easier to break them off. If you actually land it, then you have the problem of getting back over the side without getting stung.

They come in huge schools, and decimate oyster bars and clam beds. It is thought that they are currently in much greater numbers than ever, since their main predators, large sharks, have been sharply reduced by fishing. I don't particularly dislike rays, fighting one or two a year is amusing (but three or four in a day isn't, trust me), and I don't kill them when it happens. But I don't really care if fishermen who feel otherwise hold a bow fishing tournament. It would be better if they could sell them, though.

And I doubt that Gov. Hogan feels much about them either. And in any case, he has more important things to worry about:


An emotional Maryland Gov. Larry Hogan disclosed Monday that he has been diagnosed with late stage 3 non-Hodgkin’s lymphoma, which he called “a very advanced and very aggressive” form of cancer.

At a hastily called news conference that felt more like an intimate family meeting, the 59-year-old Republican described the disease as a hurdle that he plans to surmount.

“I’m going to face this challenge with the same energy and determination that I’ve relied on to climb every hill and to overcome every obstacle that I’ve faced in my life,” said Hogan, who was sworn into office in January after winning an upset victory over then-Lt. Gov. Anthony G. Brown (D).

He said that he will soon begin an 18-week chemotherapy regimen that will begin with four days in the hospital, in the intensive care unit. The governor said he will rely on Lt. Gov. Boyd K. Rutherford to fill in for him on state business and to make decisions for him when necessary — an arrangement that was put in place at least once, when Hogan was under anesthesia for an hour and Rutherford was standing by in case of emergency.

I spoke with someone yesterday who has been battling non-Hodgkin's lymphoma for several years. While all cases are different, in many cases it can be controlled with chemotherapy.

My best wishes to Gov. Hogan and his family.
Posted by Fritz at 7:10 PM