Chesapeake Bay Predicted to Have a Slightly Better Than Average Year


Scientists expect the Chesapeake Bay to see a slightly smaller than average dead zone this summer, due to reduced rainfall and less nutrient-rich runoff flowing into the Bay from the Susquehanna River this spring.

Dead zones are areas of little to no dissolved oxygen that form when nutrient-fueled algae blooms die and decompose. Resulting low-oxygen conditions can suffocate marine life. The latest forecast predicts an early-summer no-oxygen zone of 0.27 cubic miles, a mid-summer low-oxygen zone of 1.37 cubic miles and a late-summer no-oxygen zone of 0.28 cubic miles. This forecast, funded by the National Ocean and Atmospheric Administration (NOAA), is based on models developed at the University of Maryland Center for Environmental Science and the University of Michigan. 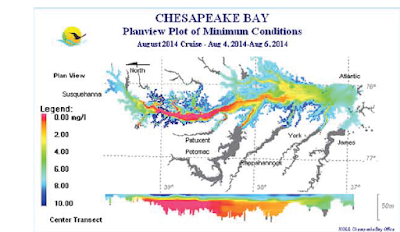 Nutrient pollution and weather patterns influence dead zone size. According to the U.S. Geological Survey (USGS), 58 million pounds of nitrogen entered the Bay in the spring of 2015, which is 29 percent lower than last spring’s nitrogen loadings.

As usual, let me note that weather (particularly winter and early spring storms) play a more important role in how the anoxia problem develops each year than the nutrient loading, which is declining slowly, if at all.

Actually, I don't think it's fair to say that the Chesapeake Bay as a whole is better. Rockfish (Striped Bass) populations are down, and both recreational and commercial fishing has been reduced, crabs are having yet another poor year. If the Bay is doing so well, why are some of its signature species in trouble? Allegedly, they've been managed to prevent such problems.
Posted by Fritz at 5:19 PM