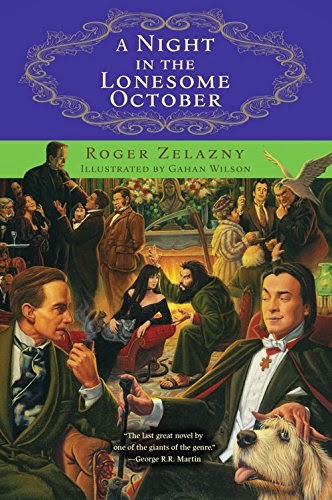 A few weeks ago, Amazon suggested that I read "A Night in Lonesome October", billed as Roger Zelazney's last book, called a "rediscovered classic".  Being a huge fan of Zelazney, who died in 1995, and risking the possibility that I had read it once and forgot it, I purchased it in paperback on Amazon Prime.

I was pleasantly surprised to find it was, indeed, a Zelazney work new to me, published apparently from a time I wasn't paying attention or something. It's a short book, and nicely illustrated by Gahan Wilson, the noted illustrator of the macabre.

You can find a plot summary on Wikipedia, but I strongly recommend buying the book, and letting the story unfurl. There are enough clues on the cover.

You can order a copy here. Thank me later.
Posted by Fritz at 7:47 PM