Spring arrives at 6:45 PM tonight, and a lovely day it is here indeed. Snowing, but not accumulating, raining cold. Also, if the sky ever clears, we will have a "Super Moon" and a total eclipse of the sun will occur in the Faroe Islands. The European partial eclipse is threatening to test Germany's power grid with it's heavy reliance on solar power. Evidently, they didn't consider the possibility that the Moon could shut off the lights briefly in the middle of the day.

This partial eclipse will cause a sudden drop and then a surge in solar-generated power that will have to be balanced out to avoid instability in the grid, Germany's Fraunhofer Institute for Solar Energy Systems said Friday.

And the Obamacare Schadenfreude?


Massachusetts Health Connector officials behind the state’s failed health care website have racked up more than $170,000 in taxpayer-funded expenses, including a Boston Harbor summertime boat cruise, luxury hotel stays, “appreciation” meals for staffers and contractors — and a $285 Obamacare cake commemorating the launch of the Affordable Care Act, a Herald review has found.
Under the Patrick administration, the Connector’s staff and board members scored numerous perks even as they spent hundreds of millions to fix the state portal during its botched Obamacare rollout. Among them:
All told, Connector officials ran up $171,030 in expenses in the 19 months from July 2013 through January 2015, the review found.

All of this is important though, because public employees have a poor sense of self-esteem.

OBAMACARE: IT’S ABOUT HELPING THE POOR! OR, YOU KNOW, HELPING YOURSELF, WHATEVER:


“Massachusetts Health Connector officials behind the state’s failed health care website have racked up more than $170,000 in taxpayer-funded expenses, including a Boston Harbor summertime boat cruise, luxury hotel stays, ‘appreciation’ meals for staffers and contractors — and a $285 Obamacare cake commemorating the launch of the Affordable Care Act.”


House Republicans rolled out their budget proposal for FY2016, and it gives conservatives some reason to cheer. It includes plans to repeal ObamaCare and offer a voucher system for Medicare to control costs. Overall it eliminates more than five trillion dollars in projected spending over the next decade while keeping the sequester in place — but uses a back door to send more funds to the Pentagon:


The document would repeal ObamaCare “in its entirety,” and calls for “starting over with a patient-centered approach to health care reform.” The document does not get into deep specifics on what this might entail – one factor is a pending Supreme Court case over the law’s subsidies that could force Congress and the Obama administration to reconsider the policy, if the administration loses.
House Budget Committee Chairman Tom Price’s $3.8 trillion plan borrows heavily from prior GOP budgets, including a plan that would transform Medicare into a voucher-like “premium support” program for seniors joining Medicare in 2024 or later. They would receive a subsidy to purchase health insurance on the private market.


Senate Republicans have been investigating parliamentary avenues that would allow them to dismantle the ACA via reconciliation with little success since the party retook the majority in the upper chamber. On Wednesday, the party rolled out a budget proposal that tackles ballooning costs associated with entitlement programs like Medicare and Medicaid. But the budget doesn’t stop at the Great Society’s entitlements.
“[Sen. Mike Enzi (R-WY)] counterpart in the House, Rep. Tom Price (R-Ga.), said on Tuesday that House Republicans will use reconciliation to repeal Obamacare provisions ‘in their entirety’ — partly an attempt to force Obama to vetoing a rollback of his signature domestic policy achievement,”Politico reported.


On reconciliation, the Senate GOP budget calls on two key committees that oversee Obamacare — Senate Finance and Senate Health, Education, Labor and Pensions — to each find at least $1 billion in deficit-reduction savings from the health care law by July 31.
That number was set intentionally low, according to the committee, to give senators some flexibility on their health-care response depending on how the Supreme Court rules in King vs. Burwell, which targets the subsidies under Obamacare given to lower-income individuals so they can buy coverage on the health-care exchanges.
If the court rules against the Obama administration and the subsidies are no longer allowed, Congress will be hard-pressed to come up with a quick response. A decision is expected in late June.

“I think reconciliation language will be a motivating reason for I think many of us to lean toward supporting the budget,” said Rep. Jim Jordan of a House Budget Committee’s proposal which also uses the budgetary tool to repeal the Affordable Care Act but proposes deeper cuts to existing social programs than does the Senate’s budget plan.

You might recall that Obamacare was passed on a party vote when the democrats used reconciliation  to totally replace a previous bill with Obamacare, using a short window during which they had a filibuster proof Senate. Turn about is totally fair play. 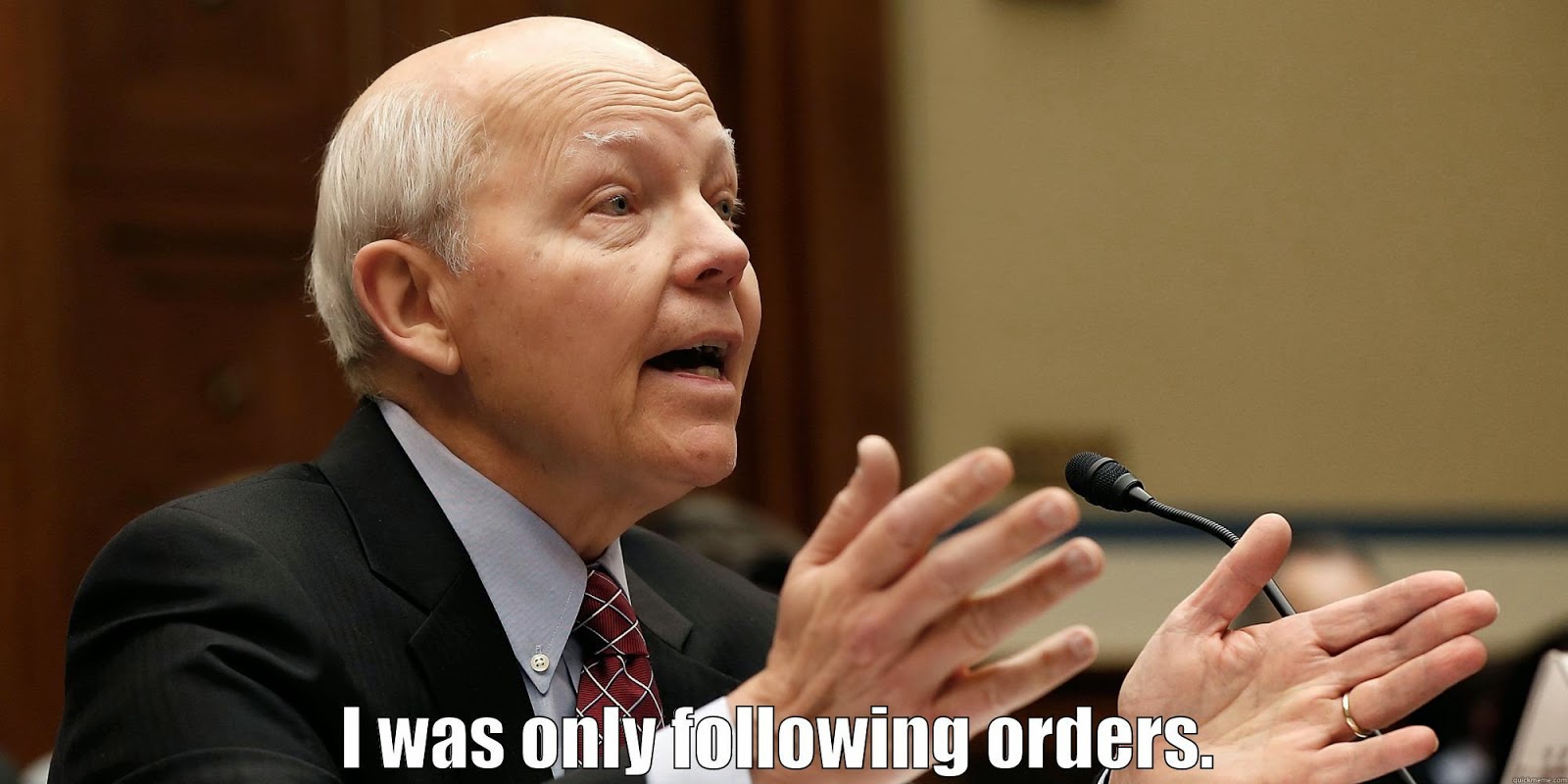 The IRS is blaming Obamacare for the agency’s poor customer service, with Commissioner John Koskinen telling Congress on Wednesday that he has had to take money away from answering phone calls and instead spend it on technology and personnel to carry out President Obama’s health care law.

Just 43 percent of taxpayers’ phone calls are being answered so far this year. Mr. Koskinen warned that it would get worse without an infusion of money and Americans may start to feel emboldened to cheat on their taxes.

The IRS chief said Congress didn’t provide additional money to prepare for Obamacare and the tax penalty filings that began this year, so he shuffled at least $100 million from user fee funding that had been going to customer service.

He should assign all of the workers in the 401(c)(3) office to the help desk, since they're not doing the work they were assigned.

Because their people are so unhelpful? IRS shifting customer service online to IRS.gov

They may not be getting help on the phones, but taxpayers this year are increasingly making use of IRS.gov, the tax agency’s website, to answer their questions.

Visits are up by 11 percent over last year, including 15 million in the past week alone, the agency said Friday. Most of the inquiries are going to the IRS’s “Where’s my refund?” tool, which tracks where in the process a taxpayer’s refund is.

The IRS also said taxpayers can now get return information online, rather than having to order it by phone and wait up to 10 days for it to arrive.


. . .Also concerned with the health insurance policy cancellations associated with Obamacare implementation, which is part of the reason for the new enrollment drive, Gaines is now suing the state Exchange.

An epic rant from Ace: I'm Done With the GOP


Allah keeps chortling, saying, "No you guys will be back," but I don't think he understands.

No, we won't be back. Not in the way he means it. If AllahPundit means that I, for example, will still prefer a more conservative president over a less conservative one, sure, of course, but then, Communists preferred the more liberal Bill Clinton over the less liberal George Bush, without actually supporting the Democratic Party with anything stronger than a velleity.

In 2014, the Establishment went all out to defeat its foes not just on the electoral battlefield, but in the battlefield of the mind as well. They wanted to teach the upstarts a lesson: You have not only lost, but you will always lose; you will not be permitted to win, ever. The entire Party will rise up to crush you should you signal any intention of bucking our Rule.

I warned them about something then: A hopeless soldier is a soldier who will desert the field.


Here's Some Truth: We all know this, but being Part of the Team, I felt obligated to lie, because I figured you expected me to lie, even though you didn't believe it.

So yeah: The GOP is never repealing Obamacare or even trying hard to do so. They will make false efforts at doing so which they can present to voters as a Good College Try, but aw shucks, we couldn't quite do it.

It's a relief to no longer have to propagate this obvious, feeble lie.

I know very few of you believe the GOP has much intention of repealing Obamacare, but, being a Republican, I have previously felt the need to present The Official Party Position even knowing it was total bullshit.

Yeah, I know, that was Schadenfreude for the other team. But GOP leaders need to hear it.
Posted by Fritz at 12:30 PM