Fracking: Better than Ever


The Environmental Protection Agency has dramatically lowered its estimate of how much of a potent heat-trapping gas leaks during natural gas production, in a shift with major implications for a debate that has divided environmentalists: Does the recent boom in fracking help or hurt the fight against climate change?

Oil and gas drilling companies had pushed for the change, but there have been differing scientific estimates of the amount of methane that leaks from wells, pipelines and other facilities during production and delivery. Methane is the main component of natural gas.

The new EPA data is "kind of an earthquake" in the debate over drilling, said Michael Shellenberger, the president of the Breakthrough Institute, an environmental group based in Oakland, Calif. "This is great news for anybody concerned about the climate and strong proof that existing technologies can be deployed to reduce methane leaks."

The scope of the EPA's revision was vast. In a mid-April report on greenhouse emissions, the agency now says that tighter pollution controls instituted by the industry resulted in an average annual decrease of 41.6 million metric tons of methane emissions from 1990 through 2010, or more than 850 million metric tons overall. That's about a 20 percent reduction from previous estimates. The agency converts the methane emissions into their equivalent in carbon dioxide, following standard scientific practice.

The EPA revisions came even though natural gas production has grown by nearly 40 percent since 1990. The industry has boomed in recent years, thanks to a stunning expansion of drilling in previously untapped areas because of the use of hydraulic fracturing, or fracking, which injects sand, water and chemicals to break apart rock and free the gas inside. 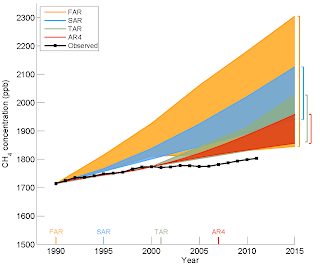 One of the big objections that ultra-greens have attempted to wield against fracking is that the methane emissions are even a greater threat to environment via global warming than the CO2 emissions that result when the natural gas is burned.  I see no particular problem there, as I see very little evidence for increased methane in the atmosphere as fracking has increased (see right), and in fact, is seriously under-performing compared to IPCC fears projections.

With the globe cooling, and methane emissions from fracking likely to continue to decline, what will be the next road block to be raised.
Posted by Fritz at 5:00 AM