At least the females...

Female koalas indulge in lesbian "sex sessions", rejecting male suitors and attempting to mate with each other, sometimes up to five at a time, according to researchers.

The furry, eucalyptus-eating creatures appear to develop this tendency for same-sex liaisons when they are in captivity. In the wild, they remain heterosexual.

Scientists monitoring the marsupials with digital cameras counted three homosexual interactions for every heterosexual one.

"Some females rejected the advances of males that were in their enclosures, only to become willing participants in homosexual encounters immediately after," say the researchers.

"On several occasions more than one pair of females shared the same pole, and multiple females mounted each other simultaneously. At least one multiple encounter involved five female koalas."

One theory put forward by the researchers is that the females do it to attract males; another is that it is simply hormonal, or that it is a stress reliever.

Scientists from the University of Queensland studied 130 koalas in captivity and will publish their results in the journal Applied Animal Behaviour Science.

One wouldn't want to extrapolate too much between humans and koala bears, but one wonders whether the additional stress of city living couldn't have a similar, if less effective effect on humans. 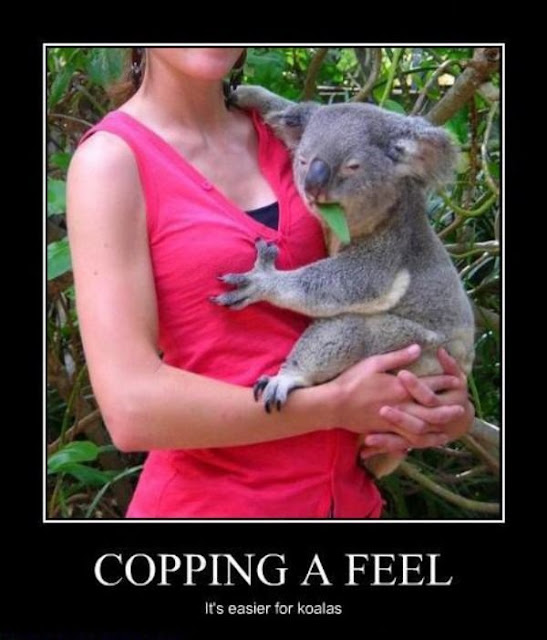 I used to think this koala was a boy, but now after reading this?  I'm not too sure.

Wombat-Socho has his Sunday Rule 5 extravaganza with "Half Your Age", in some cases, one third of mine.
Posted by Fritz at 6:00 AM