Hurricane Sandy Looms at the Beach 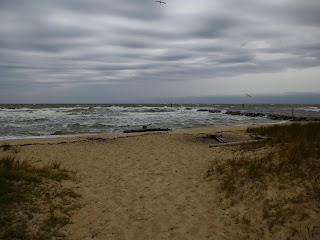 Skye and I met Joel and Red right on schedule down at the beach.  It's pretty obvious that the effects of Hurricane Sandy are making themselves felt even now.  The wind was up to 25 mph sustained with gusts to 30 and rising steadily.  They are now up to 35 sustained and gusts of 40.  Tropical Storm strength winds are considered to start at 39 mph (34 knots). 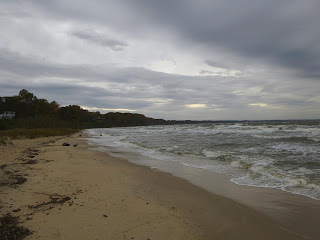 The wind seemed to be mostly coming out to the ENE, which is not a friendly wind for the beach.  Coupled with a low tide that was higher than Mean Higher High Water (MHHW) and approaching Maximum Astronomical Tide (MAT), there wasn't a lot of beach available for walking in the narrow places.  At high tide, I don't expect to see much beach 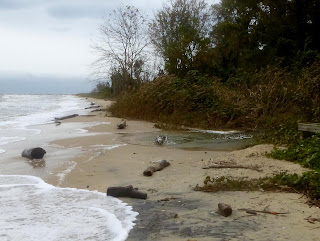 Skye made the mistake of stepping in some quicksand formed by the water pooling in the creek behind the sand bar at Charlies Creek, and fell in and flopped around trying to get her footing again.  Joel thought I was mean to let her flop while I took pictures, but he didn't step forward to grab her collar... 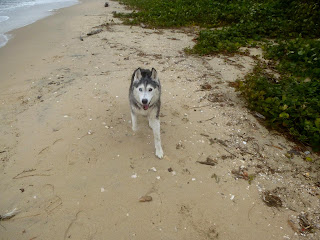 No problem, though, eventually she found her footing again and came bounding out. 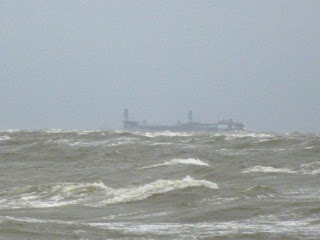 A long shot down the Bay to the Gas Docks.  The long zoom makes the waves look bigger than they really are. 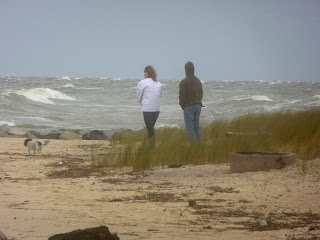 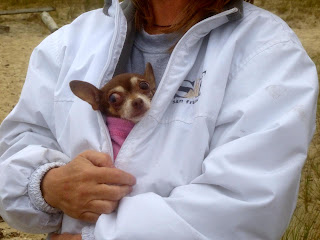 This one didn't look too happy with the weather. 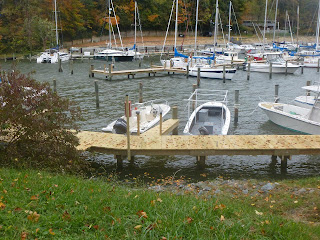 Boats in Flag Harbor.  Even with the raise in the dock height, it looks like the storm surge will cover the dock at times in the next two days.  That's my little boat on the left foreground.  It should be OK; it's got a fresh battery to run the bilge pump, but I'll probably need to check it a few times, tide permitting, to keep the scuppers free of leaves.
Posted by Fritz at 11:45 AM