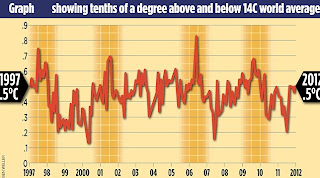 The world stopped getting warmer almost 16 years ago, according to new data released last week.

The figures, which have triggered debate among climate scientists, reveal that from the beginning of 1997 until August 2012, there was no discernible rise in aggregate global temperatures.

This means that the ‘plateau’ or ‘pause’ in global warming has now lasted for about the same time as the previous period when temperatures rose, 1980 to 1996. Before that, temperatures had been stable or declining for about 40 years.

A bunch of years ago; I don't remember quite when, but it can't have been more than about 10, I was debating global warming with some one online, and I recall writing something to the effect that individual years were effectively meaningless, get back to me in about 20 years, and we'll see what's really happening.

We haven't made my arbitrarily appointed deadline yet, but data are starting to strongly suggest that, in fact, the dangers of global warming were exaggerated, and that, in fact, while we are in a slightly warm period temporarily, the temperature over the recent past has been fairly stable.

If, in fact, the sun is tending toward a period of low sunspot and magnetic activity, and as history as shown that is generally correlated to periods of colder temperature, we might expect a modest cooling trend in the next  20 or so years.
Posted by Fritz at 7:41 PM