Bay crater may extend into Isle of Wight County

The Chesapeake Bay impact crater, an impressive 80-plus miles across, may actually be a little bigger than that.

State and federal scientists following up on a water-well permit have determined that the crater disrupted aquifers and left a rocky debris field at least as far south as Carrollton in Isle of Wight County.

Significantly, at this location, the disrupted rocks and soil are still able to transport water, which is not the case in most of the crater. 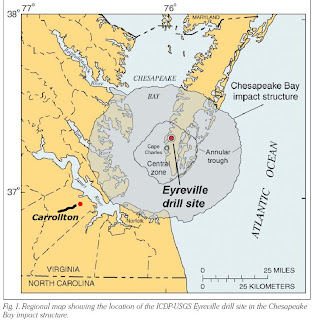 The impact crater lies under the Chesapeake Bay and Eastern Shore, as well as parts of Hampton Roads and the peninsulas. It was created some 35 million years ago by a meteor smashing into what was then a shallow sea.

The crater, thought to be at least a mile deep, has been filled in over the centuries and is not visible on the surface.

"The biggest impact crater in the United States, and the sixth- or seventh-largest in the world, and it's right under your house," said hydrologist Randy McFarland of the U.S. Geological Survey.


Water - or the lack of it - is the crater's lasting legacy. The blast destroyed aquifers across the region and trapped saltwater, making it difficult or impossible to drill freshwater wells in many locations.

McFarland joined other longtime crater researchers Tuesday at an empty lot in the Ashby subdivision, where 500 feet of core samples revealed that the crater's debris field extends farther southwest than had been mapped before.

The bolide that struck the Atlantic Ocean where the North American coast occurs in our modern era (it hasn't always been in the same place), is generally thought to have created the conditions that formed the Chesapeake Bay. The giant crater, left a deep depression and caused the rivers of the Atlantic Coastal Plain that mostly travel southeast to the ocean, to dump into the giant hole.  The crater now is not visible at the surface, was certainly a traumatic event when it occurred, near the Eocene, Oligocene boundary.  An impact that large like caused a massive extinction event on North America, and likely affected the worlds climate for a long time.

But it's OK, because it made my fishing hole.
Posted by Fritz at 7:45 PM