A couple of articles on the effects of Hurricane Sandy on the Bay:


Forecasters are warning water levels will continue to rise in the Chesapeake Bay and the Potomac River, which could cause coastal flooding.

A flood warning remains in effect through Wednesday morning for waterfronts in Baltimore and Harford County and areas along the Potomac River in the District of Columbia, Maryland and Virginia.

The National Weather Service says moderate tidal flooding is expected throughout Tuesday and into the evening. Water levels could rise two to four feet above normal tide Tuesday.

You know it's bad when Capt. Mike turns down a charter... 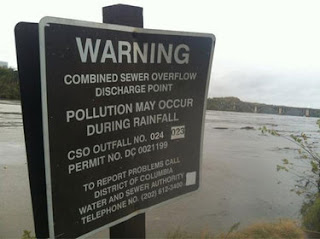 
Tens of millions of gallons of raw and only partially treated sewage spilled into U.S. rivers and estuaries because of mega storm Sandy, officials say.

A sewage treatment plant in Savage, Md., near Baltimore, spewed 2 million gallons an hour for about 15 hours into a Chesapeake Bay tributary, due to a storm-related power outage, state and county officials said.

It always happens when it rains; and Hurricane Sandy made it rain hard.
Posted by Fritz at 6:25 PM