If a little green might help restore Baltimore's ailing harbor, how can a lot be bad? That's the question city, state and federal officials are pondering as they weigh a local marina magnate's plan to fill an unused corner of the Inner Harbor with a large floating marsh.

Inspired by a pair of pint-sized experimental wetlands placed in the harbor two years ago, Dan Naor has proposed building a much larger one, covering 1.6 acres of open water in the Harborview marina off Key Highway. The chief operating officer of Baltimore Marine Centers said it's his way of joining the fight to clean up the city's major tourist attraction, which is blighted by trash, unfit to swim in and beset with algae blooms and fish kills.

"It's almost like, enough is enough," he said. "We really need to do something."

Naor's got space for floating wetlands because marina slip rentals have not recovered since the recession began in 2008. The harbor's condition is part of the problem, he said. Time and again, marina patrons complain to him about the litter and the look and smell of the water.

"We don't see this as an income source," Naor said, but "the true effect, if we can clean the water, we'll get more business."

I doubt that a few acres of wetland will do much to clean Baltimore Harbor (it already has plenty of wetlands, hidden away where not many people see them, and they're not doing the job), but it certainly wouldn't hurt to have some more.  And to some of us, salt marshes are rather attractive, in a muddy, stinky sort of way

Assuming he can get the green light for this project, Naor said he could build more, as much as 10 acres of floating beds of rosemallow, sea lavender and salt grass throughout the five marinas he controls in the Inner Harbor.

Floating wetlands could provide some much-needed fish and wildlife habitat in the harbor, which lost its shoreline marshes to development long ago. The floats also may provide at least token help, scientists say, in cleaning up some of the Chesapeake Bay's most polluted water.

But a year after approaching government agencies to seek approval of the Harborview wetland, Naor is still waiting, frustrated by a thicket of questions and concerns raised by federal, state and city officials.

It's not so much the marsh's size that bothers them, but the developer's proposal to build a walkway through the wetland, with three viewing platforms. 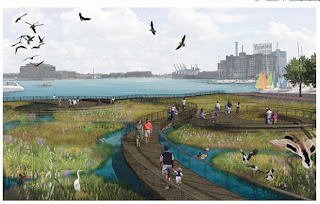 I flagrantly ripped off this photo from the Sun so you could see the  idea.  I like the idea of the walkways, so that people who are interested can get a good, up close look at a salt marsh.


Jay Apperson, spokesman for the Maryland Department of the Environment, said state officials generally favor building floating wetlands, but want to avoid or minimize any environmental impacts from building piers and platforms over the water.

The National Marine Fisheries Service likewise said it doesn't want to see piers and platforms cover the water, even if they would be used to teach school groups and others about the ecological role marshes play. Over-water structures should be limited to "water dependent" uses, said federal fisheries officials, who contend classes could learn from the shore.

I don't understand that attitude at all; in every state or federal nature reserve I've ever seen, they proudly feature a pier, or a boardwalk out over the salt marsh.  Why do they object when someone outside the government proposes the same; are they afraid of the competition?