In addition to its financial woes, California appears to under assault by sharks.  Two stories today on sharks in California.  The first, of course, is that fatal shark attack on a surfer near Lompoc:

A 39-year-old man surfing off Surf Beach near Lompoc was pronounced dead Tuesday after he was pulled from the water suffering from an apparent shark attack.

A friend pulled the victim onto the sand and started CPR while another surfer called 911. The victim was pronounced dead at the beach, which is about 60 miles northwest of Santa Barbara on Vandenberg Air Force Base (map).

The victim was identified as Francisco Javier Solorio Jr., 39, of nearby Orcutt. An initial investigation said he was "bitten by the shark in the upper torso area," according to the Santa Barbara County Sheriff's Department. Solorio was not affiliated with the military base, according to a press release from Vandenberg, which initially said the victim was 38 years old.

Solorio's fatal injury appeared to be a shark bite, and his surf board had "visible signs of bite marks," according to Lt. Erik Raney of the sheriff’s department's Santa Maria station. The sheriff's department did not have details regarding the type of shark involved in the attack but had contacted an expert to confirm the injury, the Vandenberg release stated.

It's almost certainly a case where a Great White mistook the surfer for a more delectable meal (a sealion or elephant seal), made an initial strike to disable and bleed out the prey, realized the prey was not what it had expected (neoprene skin and fiberglass board instead of skin and blubber), and left it.  Not a pleasant way to die, but one of the risks you must accept to surf in California (or almost anywhere else for that matter).


Imagine this: You're having a pleasant afternoon with your buddies, playing the links at San Juan Hills Golf Club. You arrive at the 12th tee box at the San Juan Capistrano course and there you see it: A shark, very much alive and thrashing around on the grass.

OK, so it was only a 2-foot-long shark, but still.

The fish was actually found about 4 p.m. Monday by a golf course employee, who picked it up, put it into the back of his golf cart and drove it to the clubhouse, she said. A group of golfers had just left the tee before the shark was spotted.

The shark had two puncture wounds, which made McCormack think a predatory bird had scooped the fish up out of the water, dropping the shark down onto the course. She first relayed the story to the Capistrano Dispatch.

Still, that's a pretty big shark to fall out of the sky.  At two feet, it ought to be in the 3-5 lb range. There are only two likely candidate birds, in my opinion.  A Bald Eagle could probably handle a shark that size, but I'm not so sure about Ospreys.  I think that might seriously stretch an Ospreys carrying capacity.  I have seen Ospreys on the California Coast area (near Pismo Beach there seem to be quite a few), but I have never seen a Bald Eagle.  Not to say there couldn't be a few about. According to this California Dept. of Fish and Game site, there is at least one pair on Catalina Island. 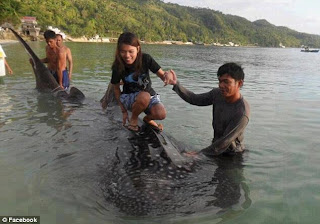 Perhaps these attacks on California are a delayed and geographically displaced (sharks aren't necessarily in a hurry, nor terribly smart) atrocity committed to sharkdom in the Philippine Islands.


A Facebook picture of a girl 'surfing' a captured whale shark has sparked outrage among environmentalists and animal lovers.

The girl, identified as Carinn Lestolis, her family and other tourists gathered around the shark in the waters of Barangay Granada in Boljoon, Philippines, after its tail was tied to a post.

They were seen petting the three-metre long fish just off shore while fishermen held on to it. Miss Lestolis was then helped onto the creature where she appeared to use it as a surfboard.