Max Keating at Da Caller insists Young Voters Are Abandoning Biden — Here’s Why. Because he hasn't cancelled student load debt? It's the only thing he's done right, so far. From Breitbart, Maher claims Biden ‘Just Goes Along’ with ‘AOC and the Woke People’ Even Though ‘He Doesn’t Really Understand It’ — ‘Reminds Me’ of a Grandpa. At PJ Media, Stephen Kruiser calls The Biden Presidency a Poorly Written Horror Novel. "And like every Stephen King novel written in the last 30 years, it’s a story that goes on far too long." At Da Wire, Joe Manchin Refuses To Confirm Whether He’ll Back Biden In 2024. Just playing to his WV supporters, who went overwhelmingly for Trump. Daniel Oliver at Am Great discourses at great length on The Wickedness of Joe Biden and His Enablers, "Undermining the system—attempting to disenfranchise the American people—is wicked." Matt Margolis at PJ Media, The Incredible Implosion of Team Kamala. Should be be surprised team Biden made a bad choice for VP?

WaPoo is hopeful, The Murdochs and Trump aligned for mutual benefit. That may be changing and AllahPundit at Haut Hair perks up, Wait, have the Murdochs really turned against Trump? NewsMax goes all in, Fox News Banning Trump From Network, but at Am Great, Roger Kimball writes Trump Stays in the Picture, "There is a certain anxiety evident in current anti-Trump imprecations, made more understandable when one looks at the polls." At WaEx, Michael Cohen was spying on Trump's 2016 campaign, book claims. Well, was an exceptionally sleazy lawyer, which made him valuable in NYC.

At Red State, 'Bonchie' details how a CBS News Poll Provides Red Flag After Red Flag for Democrats. From Twitchy, Rep. Liz Cheney’s reelection campaign will NOT be encouraged by CNN’s interviews with Wyoming voters. WaPoo reports Three more GOP impeachers face their primary juries, and it ain't looking good "That has left the anti-Trump faction of the party hoping that at least some victories come among the trio of Herrera Beutler, Meijer and Newhouse to provide voices inside a House Republican conference that are not in lockstep with the former president." Breitbart cites an Arizona Poll: Trump-Backed Kari Lake, Blake Masters Take Commanding Leads in Final Days. 'Fuzzy Slippers' at LI thinks Biden’s Border Wall Move In Arizona Could Be To Help Mark Kelly Reelection: Border Official. “The Administration knows that border security is one of the biggest issues in Arizona so an announcement like this especially at this time makes sense to try to help one of their own.” Don't be fooled.

Dan Chaitin at WaEx reports Sen. Ron Johnson expects 'deal' to conceal Hunter Biden indictment, assuming they get that far. From Breitbart, Grassley: FBI Engaged in ‘Political Interference’ in Hunter Biden Cover-Up. Well, duh! At NYPo, Miranda Devine thinks the FBI, Director Christopher Wray are in for a rude wake-up call over Hunter Biden investigation. Insty cites NR, ONE CRIMINAL ORGANIZATION COLLUDES WITH ANOTHER: Democrats and the FBI Collude Again on a Russia Smear against Republicans: This time, they’ve been able to turn Democratic collusion with foreign powers into an illusion of disinformation. "Worst, most corrupt, president ever. And the worst, most corrupt FBI and Justice Department and national security bureaucracy ever — along with the worst, most corrupt media ever."

Jazz Shaw at Haut Hair reports Alaska's ranked-choice voting creates the expected chaos. Dan Greenfield at Front Page says A New Bill Takes On 'Zuckerbucks' and ‘Bidenbucks’ "The plan to save the 2024 election is underway." At Breitbart, RNC Hits Election Integrity Milestones 100 Days Before Midterm Elections "With 100 days left before the election, the RNC has surpassed a significant milestone with over 32,000 poll watchers in primary, general, and special elections so far this cycle. In addition, they have made over 65,000 unique volunteer engagements and have held over 2,700 Election Integrity trainings." At LI, Ilana Cutler writes of David Brock’s “65 Project” Targeting Republican Lawyers An “Insidious Attack on Democracy” "The message to lawyers who would represent Republicans in election disputes is clear: We will come after you, so do yourself a favor and stay away."

Althouse, "[T]here has been an unrelenting effort to make 'insurrection' a litmus test for anyone speaking about January 6th."

"If one does not use that term (and, worse yet, expresses doubts about its accuracy), you run the risk of immediate condemnation as someone excusing or supporting insurrection. This framing also reduces the need to address the question of how this riot was allowed to spiral out of control.... The effort to mandate 'insurrection' as the only acceptable description prevents the country from speaking with a unified voice. It clearly serves political purposes but only makes a national resolution more difficult as we approach a new presidential election."

Writes Jonathan Turley in "Harvard Study: J6 Rioters Were Motivated by Loyalty to Trump, Not Insurrection Against the Constitution."

Insty,  YEP . . . And I’ll venture this prediction: If the Biden Administration’s catastrophic downward spiral continues, the January 6 “insurrectionists” will eventually come to be seen as martyrs who tried to prevent a tragedy. Larry Elder at Front Page makes the case Trump Is Not an 'Insurrectionist'; "Peacefully and patriotically make your voices heard." At Da Caller, Deroy Murdock, Here’s One Fact Democrats Are Forgetting To Mention About Jan. 6

Totally ignored in the thoroughly documented fact that Trump authorized up to 20,000 National Guard troops to keep Washington tranquil on Jan. 6.

Such an order would have violated 18 U.S. Code § 1385. The Posse Comitatus Act of 1878 bars the U.S. armed forces from civilian law enforcement. The president may authorize National Guard troops, but governors (or D.C.’s mayor) must request them before the GIs roll.

Breitbart cites a Harvard Study: Only 8% of Capitol Rioters Wanted ‘Insurrection’. And I would guess they slanted the questions to make it seem more.

From the Wa Free Bee, CNN Journo Who Reported ‘Fiery But Mostly Peaceful Protests’ Gets Emmy Nomination, "Omar Jimenez nominated for 'Outstanding Emerging Journalist'" for aiding and abetting the party line. At Summit News, a Report the Wannabe Kavanaugh Assassin Claimed He Was “Shooting For 3” SCOTUS Justices, “I could get at least one, which would change the votes for decades to come.” RNC Research@RNCResearch, "Joe Biden's message to pro-abortion protesters: "Keep protesting." Meanwhile, Biden still has not condemned the attempted assassination of Justice Brett Kavanaugh."

At Front Page, Bob Spencer notes how Whistleblowers say Biden’s FBI ‘Pressured & Incentivized’ Agents to Classify Cases As Domestic Violent Extremism. It's in short enough supply that they need to find more to justify their crackdown. At Am Great, the redoubtable Julie Kelly revives interest in the Whitmer kidnapping setup,  As New Trial Looms, Justice Department Silent on Whitmer Plot. "Among the many questions Americans deserve to have answered surrounding the FBI’s activities, the Whitmer kidnapping hoax is near the top of the list." As Sean Callaghan, also at Am Great, notes The Justice Department Delegitimizes Itself. "The government is fast racking up taxpayer bills approaching $100 million going after Donald Trump while spending but pennies to put leftist rioters in jail. It’s a problem." 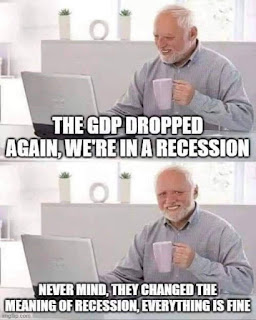 HE notes that Wikipedia Redefines 'Recession' to Resemble Biden's Changes—Then Locks Page to New Edits. Rick Moran at PJ Media observes that Social Media Fact-Checkers Are Rejecting Criticism of Biden's Recession Doublespeak and The 'Recession or Not' Argument Is a Distraction: Our Economy Is Worse Than Almost All Major Countries.  Breitbart pays attention to Paul Krugman (always a mistake),  ‘Determination’ of People to Say It’s a Recession ‘Above and Beyond Anything I’ve Ever Seen’. Capt. Ed at Haut Hair VIP, Krugman: C'mon, the bad-economy narrative is a media concoction; he's doing just fine. Michael Walsh at Da Pipeline, America's 'Transitioning'—but to What?

At Politico, Manchin to Sinema: Believe in this bill, "All eyes have now turned to the Arizona Democrat to see if she will support the legislation agreed to last week." Remember, they need all the Democrats. As Andrea Widburg at Am Think notes Manchin’s deal is so bad, even Sen. Lindsey Graham is speaking up. I&I, The ‘Inflation Reduction Act’ Is A Lie, Pure And Simple. “The impact on inflation is statistically indistinguishable from zero. Worse, “the Act would very slightly increase inflation until 2024 and decrease inflation thereafter.” 'Bonchie', Report on Reconciliation Confirms Joe Manchin Is a Pathetic Coward "I have an embarrassing confession to make: I once, sort of, respected Sen. Joe Manchin of West Virginia." From Based Politics, (BP henceforth), Biden Pushes Massive Tax Hike on Workers as Recession Begins. Chris Jacobs at Da Fed warns ‘Build Back Better’ Bill Would Fund 86,000 Additional IRS Agents To Sic On American Taxpayers. "Does anyone believe that doubling the size of the IRS means new employees will only focus on ‘the rich’ and avoid targeting middle class Americans?" The formerly sensible  Kevin Williamson at NR (cited by Haut Hair), is pissed at The Democrats' unserious climate-change deal." Hey, you voted for this.

From ET, Climbing Rates, Halt in Refinancing Blamed for Mortgage Industry Nosedive. Things are going swimmingly. Levon Satamian at Red State warns Beef Prices Expected to Increase Even More, as Farmers Are Forced to Sell off Cattle Herds. John Davidson at Da Fed, Pay Attention To The Dutch Farmer Protests Because America Is Next. "The same climate policies that are set to destroy private agriculture in the Netherlands are eventually coming to America."  All part of the plan to get us to eat bugs instead of meat.

Da Wire reports a Trans Cheerleader Booted From Camp For Allegedly Choking Female Teammate: Called Me ‘Man With A Penis’ So much for "sticks and stones may break my bones, but words will never hurt me. At Red State, Trans Cheerleader Allegedly Strangles Squad Member After Phobia Inflames the 'Man With a Penis'. Paul Gottfried at Am Great wants more Talking Back to the LGBT Lobby. At Da Caller details how The Clinical Steps To Grooming Kids Match Exactly How They’re Being Taught In Schools.

The Wa Free Bee, New Media Rule: Don’t Say Gay. "The word is conspicuously absent from media coverage of the monkeypox outbreak." The Babylon Bee notes how the Government That Shut Down Businesses, Parks, Schools, Beaches, And Churches For 2 Years Says There’s Nothing We Can Do To Stop A Disease Spread By Gay Sex. Wa Free Bee again, Medical Schools Must Go Woke, Accreditor Declares, "The Association of American Medical Colleges releases diversity, equity, and inclusion guidelines." and  How One Medical Board Is Injecting DEI Into All Aspects of Medical Education. "The American Board of Internal Medicine Foundation will require doctors to answer questions about 'health equity' to keep their certification." At Am Think, Robert Weissberg thinks about When Public Health Goes Woke. Do you want a doctor who knows how to treat disease, or one who knows how to treat racism and sexism?

Charles Gasparino at NYPo, Twitter on the cheap: Is Elon Musk eyeing a discount?. There's still hope? At Town Hall Kurt Schlicter at Town Hall chortles when Media Hacks Pout As Republicans Treat Them Like the Trash They Are. Lloyd Billingsley at Front Page discourses on BigTech.Gov.Con, "The government deploys tech companies to violate Americans’ right to free speech." At Am Think, Robert Merz thinks about Propaganda and Disinformation in the Information Age. At Am Great, the great Victor Davis Hanson wonders Are the New Progressive Rules Reciprocal? "Are today’s norms tomorrow’s norms?" At Town Hall Dereck Hunter simply wonders Why Do Democrats Lie So Damn Much?

The Wombat has Late Night With Rule 5 Sunday: Komi Shuuko primed and powdered and ready for battle.