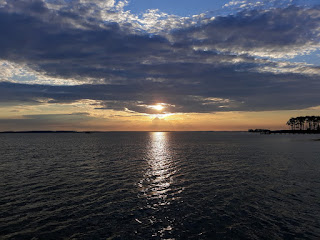 Walleye Pete called a short notice walk-on trip yesterday when his charter for the day cancelled because they were afraid of thunderstorms, based on a forecast for storms in the afternoon. Pete was pretty sure he could get a full day in before anything hit. He was right. He had no trouble getting 5 of us to sign on with less than 24 hours notice.
Sunrise over the Eastern Shore 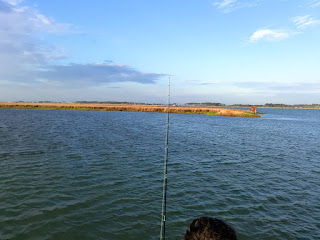 A pretty typical fishing spot. Some spots held fish, some didn't. Today was the first day of regular Striped Bass season, during which recreational anglers can keep1 fish over 19 inches, or 2, if fishing with a charter captain like Pete (a sop to the captains to help their businesses). 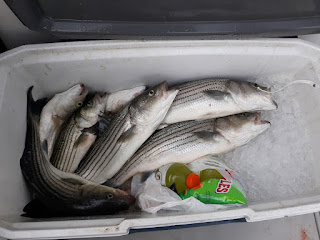 We picked out a limit of legal Striped Bass by about 11 AM, and set our sights on Speckled Trout. It's pretty early in the year for good Speck fishing, but Pete had caught 6 in the previous couple of days, and headed off to spots where he thought the chances for Specks were better. 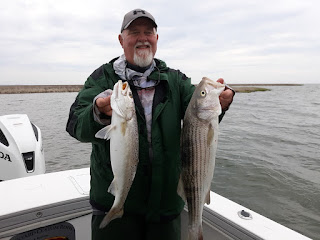 Sure enough, we started catching Specks mixed in with some even better Stripers, that we had to throw back. 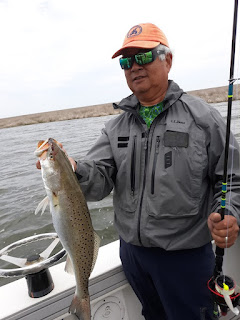 A particularly nice speck, at 24 inches. 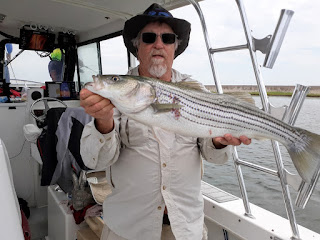 Somehow, the specks managed to stay off my line (although I lost two fish that might have been specks based on what others were catching), but I did catch the biggest striper of the day, which Pete generously estimated to be 30 inches, returned to the water for another day.