As the tight-knit sportfishing community in Kailua-Kona, Hawaii, mourns the bizarre death of Capt. Randy Llanes, who on Friday was impaled by a swordfish that he had speared, more is revealed about the man, the incident, and the type of fish that killed him.
. . .
The extraordinary incident occurred inside Honokohau Small Boat Harbor. A swordfish measuring between 4 and 6 feet, with a 3-foot bill, had been spotted deep inside the harbor–a rare occasion because swordfish typically roam deep, pelagic waters. 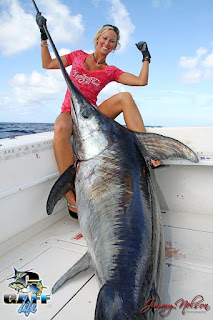 That alone makes it a pretty weird incident. That's not the kind of fish you expect to find in a harbor.


Llanes, aware of the value of swordfish meat, seized the opportunity. He dived in and speared the fish, but the spear line became tangled with a boat’s mooring line. The swordfish spun around the mooring line like a tether ball, and suddenly reversed direction and speared Llanes in the chest with its sharp bill.


When in the water, beware of sharp things that swim fast. Steve Irwin found out the hard way, too. 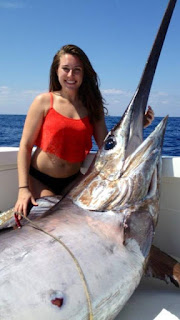 It remains unclear whether the swordfish attack on Llanes was intentional, but broadbill swordfish (Xiphias gladius) are referred to as gladiators of the sea. They’re notoriously powerful and prone to fits of rage, especially after becoming hooked by anglers.

They’ve attacked boats and in one strange case a free-swimming swordfish attacked a submersible research vessel at a depth of 2,000 feet. The sub, named Alvin, was brought to the surface because of concerns about damage, and the swordfish was still attached, and dead.

They get pretty darn big, too.

It's sad, and my heart goes out to his family. Be careful out there. To the ocean, you're just another piece of biomass.

Wombat-socho checks in from his new home town with "Rule 5 Sunday: Welcome To Las Vegas."
Posted by Fritz at 7:26 PM