Not exactly Jurassic Park material yet, but...
Russian Scientists Grow Pleistocene-Era Plants From Seeds Buried By Squirrels 30,000 Years Ago


On the frozen edge of the Kolyma River in northeastern Siberia, in an ancient pantry harboring seeds and other stores, an Arctic ground squirrel burrowed into the dirt and buried a small, dark fruit from a flowering plant. The squirrel’s prize quickly froze in the cold ground and was preserved in permafrost, waiting to grow into a fully fledged flowering plant until it was unearthed again. After 30,000 years, it finally was. Scientists in Russia have now regenerated this Pleistocene plant, transplanting it into a pot in the lab. A year later, it grew forth and bore fruit.

The specimen is distinctly different from the modern-day version of Silene stenophylla, or narrow-leafed Campion. It suggests that the permafrost is a potential new source of ancient gene pools long believed to be extinct, scientists said.

The fruits were buried about 125 feet in undisturbed, never thawed permafrost sediments, nestled at roughly 19.4 degrees F (-7 C). Radiocarbon dating showed the fruits were 31,800 years old, give or take about 300 years. Seeds are incredible things, storing the embryo of a new plant and encasing it in protective material until conditions are right for it to germinate. 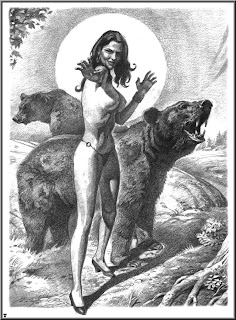 Scientists led by David Gilichinsky at the Russian Academy of Sciences worked with three of these fruits and took placental tissue samples. They fed the tissue cultures a cocktail of nutrients to induce root growth, and once the plants were rooted, they were transplanted into pots in a greenhouse. Just as they were supposed to, plants grew, developed flowers and fruits, and went to seed. (Gilichinksy died a few days ago, the BBC reported.)

Pretty cool stuff.  This probably isn't high tech work, just careful tissue culturing.   One interesting thing is that this seems to offer a glimpse back at the evolution of this weed:


Gilichinsky and colleagues also grew modern-day narrow-leafed Campion as a control, and noticed some key differences among the two generations — the Pleistocene version put out twice as many buds, but the modern version put out roots faster.

I had to stretch pretty hard to find the right "Cave Girl" for this post.  It seemed to me that the bears were appropriate because of the Brown Bears and their American equivalents, Grizzly Bears that lived out on the tundra. There's the plant in the lower right. of course.  The high heels?  You didn't know the Denisovan's had high heels?