Stormy Sunday at the Beach 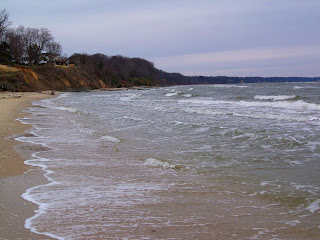 We were supposed to be getting a winter storm today, although the forecasts kept moving the rain and snow away from us.  It was cloudy and windy and cold, but not too awful. Skye insisted that we go for a walk (that's my story, and I'm sticking to it). 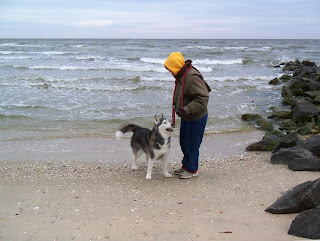 The girls are discussing whether Skye deserves a treat or not.  I think Skye won.  Seriously, we use reward training on her, and by most accounts she is a rare Siberian who can be (mostly) trusted off the leash. 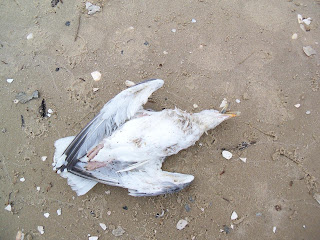 I'm becoming more convinced that the eagles are subsisting on sea birds, including sea gulls, this time of year. There were three relatively recently killed gulls on the beach this morning. This one died with a fish in its mouth.  Now, I'm pretty sure that means it wasn't sick, so I assume something killed it, and there's only one logical predator around to do that.  Maybe it killed it and then dropped it on the way back. 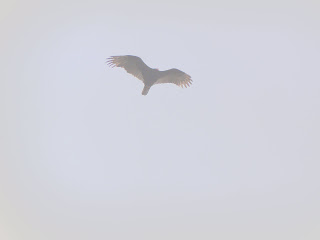 There were no eagles hanging about anywhere that I saw today, but there were a couple of Turkey Vultures.  I played with this photo quite a bit to bring out the contrast between the light and dark on the wing, and got a glimpse of the red head as well.  In real life, and the original photo, before GIMP this was just a silhouette. 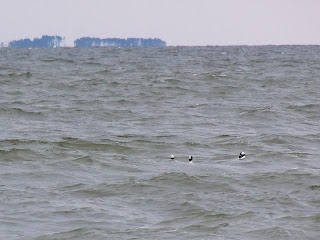 The Buffleheads are still here.  It won't be long before they go north again.  That's James Island across the Bay in the distance, or rather, what remains of it. 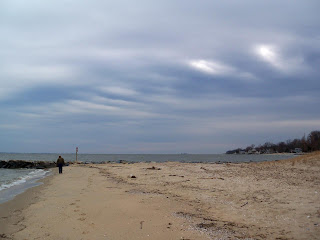 Just an interesting cloud formation on the way back home, looking south.
Posted by Fritz at 6:04 PM