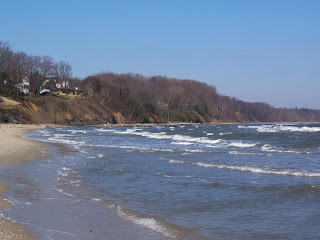 The passage of the "Great President's Day Snow Storm of 2012 (Not)" left us with a typical post storm day, windy, cold and clear.  The surf was up, about as much as it gets around here. 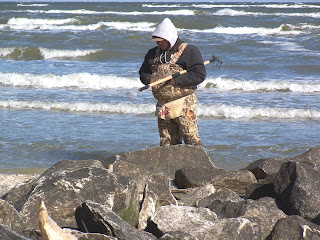 A fellow fossil hunter. We stopped to swap lies about our largest shark's teeth. 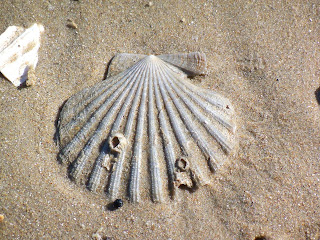 Tooth hunting wasn't good today.  The less said the better, so instead, I'll feature some of the shells we find on the beach.  This is the extinct scallop Chesapecten, one of our more common fossils.  They range from dime size to nearly plate sized. 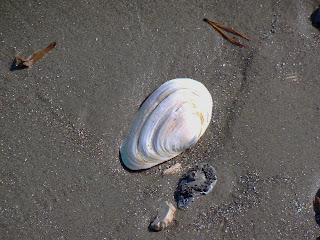 A modern soft clam, Mya arenaria.  A common clam up and down the East Coast, they are sought after for food as soft clams, manos, piss clams, steamers, etc. etc. There is an active fishery for them in the Chesapeake, using a destructive dredge boat, but I've never seen clam dredgers near here, only in the Patuxent River. 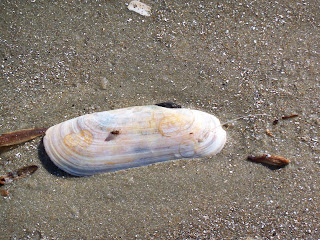 One shell of a Stout Razor Clam, Tagelus plebeius.  For some reason the beach had an unusual number of these scattered around today.  There is a substantial fishery for the razor clam here as well, but mostly as bait for crab and eel pots. The infamous shot gun shell, well worn and fouled from it's floating trip in from somewhere else. 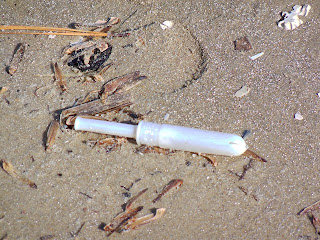 Another shell found on the beach today. 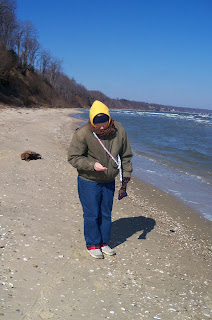 Georgia examining something to decide if it's worth keeping.  Very little of it was today... 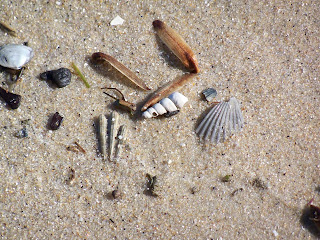 A small Turritella shell. Definitely a fossil, these are fragile, and moderately rare here, but common enough elsewhere as to be valueless.   Given the large numbers of Turritella species, I wouldn't even begin to guess which one. 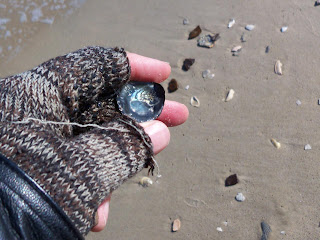 The ubiquitous oyster shell.  Oysters were common around here until recently, but fishing and diseases have all but eliminated them, so that most of the oyster shells on the beach can be thought of as fossils-to-be.  This little one has been blackened by being buried in sulfidic sediment, and shows a nice nacreous layer (mother of pearl, the stuff that make pearls shine).
Posted by Fritz at 2:52 PM