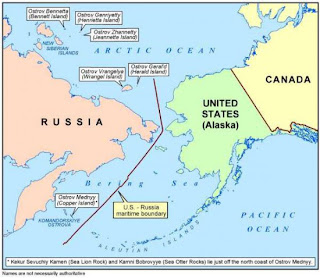 Or a few little bits of it anyway: Obama Gives 7 Oil-Rich Islands to Russia: Secret GiveAway – Alaska Not Consulted

It appears that the State Department is preparing to give away seven islands in the Arctic to Russia.  The islands have been in dispute for many years since the Russian Revolution, but not being inhabited or even particularly useful, the dispute has been smouldering at a low level for a long time.  The islands themselves are mostly small, and lie on the Russian side of the US-Russia marine boundary line.  The US claim on the islands dates in part back to the 1867 treaty between the U.S. and Czarist Russia:


...to the meridian of one hundred and ninety-three degrees west longitude [167 degrees east], so as to include in the territory conveyed the whole of the Aleutian islands east of that meridian."

Which puts Copper Island, Sea Otter Rock and Sea Lion Rock on the US side of the line.    As far as the claim to Wrangel Island and the other tiny islands off the Siberian coast, the claim, as I see it, appears to have arisen from it's "discovery" in 1881 by a U.S. Naval vessel "Corwin" under the command of Calvin L. Hooper, who landed there, and claimed it for the US.  Although the island had been sighted several times previously and landed on at least once, no one, at least in the modern era, had yet seen a reason to claim it.

Wrangel Island, at 2,900 square miles, is by far the largest of the disputed islands. It has an interesting story.  One of the last reserves of the pliestocene megafauna, Wrangel supported a small population of small (and probably very hungry) Woolly Mammoths until approximately 4000 years ago.  The island was discovered by prehistoric humans at some point, and shortly thereafter, the last Woolly Mammoths disappeared.  A coincidence, I'm sure. 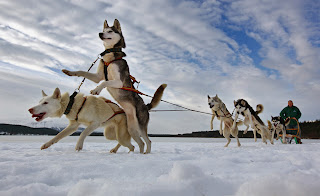 The natives of the adjacent region of Siberia, the Chukchi, originators of the breed of dog to become the Siberian Husky, apparently knew of the island, (you can walk to it across the ice in winter), but didn't colonize it, recognizing it to be even more unpleasant than the rest of Siberia. Inuit people landed there occasionally, but there was no resident human population on it when the Europeans discovered it.  Since then, the Russians, the Canadians and the U.S. have vied for control of the island.  The Russians have been the most successful, having more or less continuous occupation after the Soviets captured and removed a small American/Inuit party in 1924. 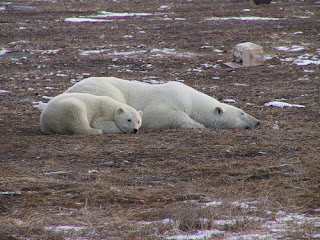 In 1976 the Soviets established a nature reserve there.  In recent years it has become a tourist destination, with cruise ships anchoring and sending tourist ashore by boat in summer to see the imported Musk Ox, Reindeer and the native Polar Bears, which come to Wrangel to bear their cubs

The dispute, as these things tend to go, is mostly about resources. Wrangel Island, and the other Siberian Arctic islands (and the territorial waters that would accompany them) are sitting in areas that the Interior Department has identified as having the potential to produce billions of barrels of oil.  The outer Aleutian islands, Copper Island and Sea Lion and Sea Otter Rocks, also potentially command substantial claim over fisheries resources (Deadliest Catch, anyone) through a claim on their territorial waters.

Should the US give up it's claim to these lands?  I dunno. Our claim seems pretty tenuous, but then, the claim of the Russians doesn't seem a whole lot stronger.  If it were up to me, I'd think I'd try to find a way to stall a another hundred more years.