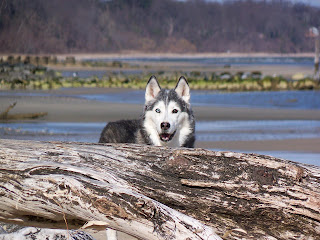 Skye here again!  The big guy said I did so good with yesterday's beach report that I could do it again today!

So how about the end of the great heat wave, and the return to nice temperate weather?  We had a little snow last night, but hardly enough to soften my steps!  And it's almost all gone already! Maybe tomorrow we'll get more, enough that I can roll around in! 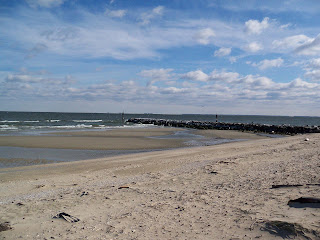 What a really nice day at the beach!  Just enough wind to barely penetrate my undercoat; quite refreshing, actually!  Sometimes even enough to kick some sand up into the air!

The people got all bundled up to go, and it took a lot longer than usual! 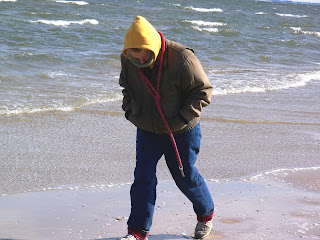 Anyway, down here at the beach, the water was way out, and in some places, solid!  I think that's a good sign that the weather is about right!

Say, do you know how many words for "snow" the Chukchi people have?  Me neither!  I don't count!  But it's a lot, almost as many as they have for "stupid Russians", but not as many as dogs have for "silly people!" 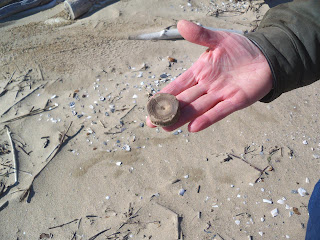 I ran and ran and they walked and walked!  I had a great time, even though I didn't find anything worth eating on the beach!  The female found something on the beach that the big guy said was a fish bone, but I was downwind, and it didn't smell like a fish bone to me!  Maybe it was really old and worn out! 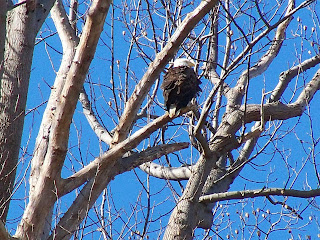 The big flying scavenger was way up the beach today, looking a little ruffled!  I don't see why the people are so interested in them! Red and I met one on the beach once, and it seemed pretty mean and nasty, and wouldn't share it's treats!  Stupid flying things! 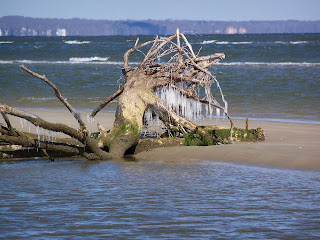 Walking in the water caused a bunch of icicles to form on my belly fur!  It didn't bother me until we got home, and the the female made me wait in my den until they melted!  They ate while I sat in my den and melted in the sweltering heat!  That was mean!  I reminded them a lot!  But eventually they let me back out!  Now it's time for a long nap!
Posted by Fritz at 2:36 PM