Praise for the Yellow Perch

Gold-green and shimmery, the fish slide off of Matt Meredith's shovel and onto the culling board of Capt. Anthony Conrad's small boat in the Bush River.

Meredith and crewmate Kevin O'Neil quickly sort the fish, loop yellow tags through their mouths and drop them in a crate.

The crates of fish will be sold to restaurants and at Conrad's Baltimore County seafood market.

They're a fish that few Marylanders have eaten or would recognize: yellow perch. 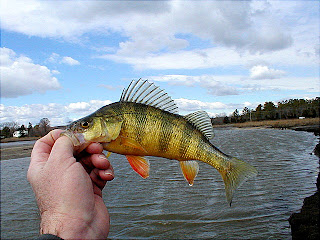 Yellow Perch (Perca flavescens) is the first fish to spawn in Maryland each year.  In Chesapeake Bay, they live in the upper regions of subestuaries, where the water is fresh but lake like, and migrate into the small freshwater streams in late March or early February, where the females lay huge strings of eggs, which stick on the bottom, side and any objects (like sticks).  The eggs hatch and the fry are live in the streams for a while before moving down into the bay.  In most of the northern US,  they live in lakes and spawn in streams.  The fact that Yellow Perch in the Bay live partially in brackish water is unique, and thought to be do to the ice ages forcing them to colonize the brackish waters as the Bay itself came and went several times.

Despite the article, most Maryland outdoorsmen (and women) are well acquainted with Yellow Perch, and the early spring spawn is a pretty big deal as the first opportunity to catch (and eat) fish of the year.  They are a delicious fish, with sweet, white flesh.  In some regions they seem prone to parasitic worms that form cysts in their flesh; while off putting, these can be cut out with out problem.

Like many other highly sought after fish, Yellow Perch populations have been seriously impacted, by both fishing and land use changes in their watersheds.  Many tributaries that formerly had healthy populations of Yellow Perch currently have little or none.  The Maryland chapter of Coastal Conservation Association made Yellow Perch conservation a big issue for several years, which helped Maryland to get serious about producing a Yellow Perch fishing management plan:


About four years ago, Maryland reworked its management plan for yellow perch. Commercial watermen aren't allowed to catch a lot of yellow perch, and so, for the past two winters, the Department of Natural Resources has been promoting the fish in hopes of driving up prices.

Statewide, several dozen watermen combined can catch only 50,000 pounds of yellow perch, with most of it in the Upper Bay and smaller quotas in the Patuxent and Chester rivers. If watermen can make more money without catching more fish, that's good for the fish population, said Steve Vilnit, the DNR's seafood marketing expert.

I'm proud to say I was part of that effort.
Posted by Fritz at 7:00 PM