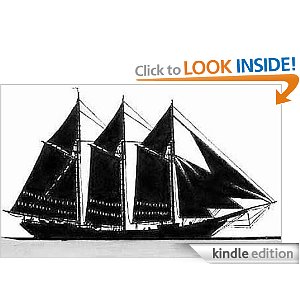 Amazon suggested this book on Kindle for a mere $0.99 a couple of weeks ago.  I hadn't read a good boat opera in a while so I indulged.

The books (two actually, there is a second "The Voyage of the Albatros," in an obvious series to come) are set in a post apocalyptic future after the collapse of civilization as we know for all of the obvious reasons.  A group of sailors and scientists on a subarctic archipelago, the Kerguelen Islands, retain a minimal level of technological ability, center fire rifles, radio, diesel and Stirling engines, and are starting to expand a trade centered, largely sail powered trade based civilization of loosely connected island states in around the southern ocean.

The protagonist, Sam Bowditch, the Captain of a trading ship, is attacked by pirates off the coast of Madagascar.  Successfully repelling them, at the cost of his second officer and best friend, he returns to "Kerg" determined to rid the world of pirates.  He persuades the trader of "Kerg" to fund an infant Navy, of one ship, the Albatros, a converted schooner, and sets off to track down the pirates who attacked him.  The whole flavor of the books owes quite a lot to the old "Horatio Hornblower" genre.

The great political catch to the books is the identity of the pirates, who turn out to be followers of a surviving sect of Islam, under the control of a prophet, the "Mahdi."  The pirates motivation seems a little weak, their economy seems to consist of rare captures of Kerg vessels, the occasional mass murder of men and kidnapping of women, and lurking near the southern ocean.  The parallels to modern times are hardly thinly disguised.

I really enjoyed the books, and look forward to the next installment.  A great find for the price.  4 out of 5 stars.
Posted by Fritz at 5:00 AM