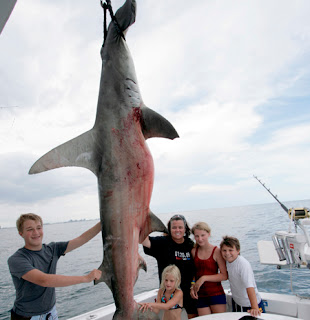 Rosie O’Donnell and her family caught huge hammerhead sharks in fishing trips off the South Florida coast. Now environmentalists (are) irate at the killing of ocean predators that are considered overfished around the globe.

“Right now sharks are the most endangered animals around,” said Erik Brush, a Sarasota marine conservationist. “This is basically an endorsement. It sends the message that it’s an OK activity. And this is not an activity that we want celebrities endorsing.”

As for O’Donnell’s reaction to the controversy: “She’s amused by it.”

And the Daily Mail adds:

(She) has defended herself by responding to individual tweets saying, ‘chill people - really - my family fishes’.

Well, it's OK to kill (the shark above is not going to be release alive...) endangered species if your family really fishes.  Apparently if you are part of the liberal side of the media you can take endangered species with  impunity.  Although according to the supporting literature with the Endangered Species Act (1973) it expressly forbids:


a person to take a listed animal without a permit. Take is defined as “to harass, harm, pursue, hunt, shoot, wound, kill, trap, capture, or collect or attempt to engage in any such conduct.” Through regulations, the term “harm” is defined as “an act which actually kills or injures wildlife.

As for the hippo, her support for other sports is expressed in this quote:

Seems to be an appropriate sentence for here as well.