A little while ago, February 13th to be exact, I did a post about dictators wives and how good looking they are. It wasn't a terribly original post; I copied the pictures and quoted quite liberally from a Rule 5 blog post over at Maggies Notebook.  I gave them credit in the opening line, and I figured, what with the 50 or so people a day who visited my blog at that time, and them not being the kind of people to scour the internet for random junk (they'd mostly rather see a fishing post), it would mostly be original to them and might be somewhat amusing. I subsequently added a  tangentially related Mel Brooks video. I also linked a video of Colonel Qaddafi's  Ukrainian nurse Galyna Kolotnyska.  Little did I know what I had unleashed.

Over the past month and a half, the number of hits on that post has continued to grow.  In the past 24 hours, it has been hit over 300 times.  In large part, the Google hits come on some variant of the name Asma al-Assad, the wife of the Syrian dictator Bashar Assad, although a couple of the other wives got a few hits as well.  In my mind, Asma was not even the best looking of the lot; I'd have to go with Mehriban Aliyeva, wife of the dictator of Azerbaijan.  Not that Asma is a dog. She's quite attractive.  That being the point that I didn't make too clearly in the original post, that dictators are attracted to beautiful women, and beautiful women are attracted to men in power.  It's biology of the sexes at its most potent.

I sometimes wonder if I've attracted the attention of Syria's secret police, but given the recent events in the Middle East, I rather suspect they're busy with local affairs, suppressing dissent and all that.

She appears to be an intelligent, western minded woman.  She speaks in an elegant English accent, having been born in England.  We all know a good English accent adds 10 IQ points in the mind of the uneducated American listener.  No sign of confining herself to the hajib. She seems to have sufficient wealth to pay for good clothes  (It's Good to be the King).

She also  appears to be quite an asset to her husband, making many personal appearances, and doing quite a lot of charity work

Bashar seems to be an unlikely dictator. Originally second in line to take over the position from his father Hafez al-Assad, he seemed destined for a life of relative unimportance, studying ophthalmology in Damascus and London.  After the death of his older brother in a car crash in 1994, and his father's death in 2000 he was elevated to the position without much fuss.

He seems to have taken to the role with relish, however, and after a very brief respite when many prisoners were freed, dictatorial rule continues down through the present.  Under Bashar, Syria has continued to dominate it's weak neighbor, Lebanon.  Unlike his father's strong chin,which he clearly failed to inherit, he seems to have inherited the ability to dominate a country.

Which brings us to the present.  Tunisia and Egypt have overturned their governments; Libya, Yemen, Dubai all seem to be somewhere on the path, and Syria seems to be experiencing the first hints of strengthened rebellion.  While I don't care a bit about Bashar, it would be a shame if something happened to Asma. 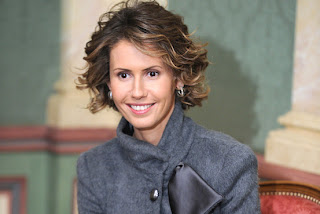 Maybe Barack Obama could take her on as a second wife.  I hear Muslims do that sometimes....


UPDATE: Muchas Gracias to the Rule 5 Wombat for the link from The Other McCain!
Posted by Fritz at 10:45 PM