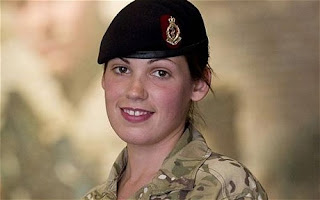 A female medic who twice risked her life under heavy fire to treat two gravely wounded Afghan soldiers has won the Military Cross.


Lance Corporal Kylie Watson, 23, tried to resuscitate one casualty as bullets smashed into the dust around her in a totally exposed position for 20 minutes.

She was also forced to use her SA80A2 rifle in anger firing 15 rounds to help defend her patrol during an ambush.

The LCpl also ran 100 metres under fire to save the life of another ANA soldier who had been shot through the pelvis.

His Afghan comrades were unhappy about a woman treating the wounded man and tried to stop her.

The Lance Corporal from Ballymena, who stands 5'1" tall, said: "I told them straight (through an interpreter), 'If I don't treat him, he dies. There is no argument, he is getting treated...

Not only does she heal, she fights...


She said: "About 12 of us were patrolling south a few hundred metres when we came under small arms fire from three men in a ditch.

"There was no cover available to us apart from an irrigation ditch but you don't want to dive into one of them in case it has IEDs planted in it.

"We needed to stop them shooting at us quickly and had to help. I just took a knee and fired about half a magazine at their position, about 15 rounds.

"It sounds dramatic I suppose but it wasn't, I know for a fact I didn't hit a thing. I need to get on the range a bit more often I suppose."

Is it my imagination, or do the Brits celebrate their soldiers more than we do here in the states?

Email ThisBlogThis!Share to TwitterShare to FacebookShare to Pinterest
Labels: military