Although fish have long been suspected of having an important role in seed distribution, proof of their ability to carry fertile seeds such distances has been lacking.

Jill Anderson, an evolutionary ecologist at Duke University in North Carolina, and her team had previously discovered thousands of seeds in the guts of Colossoma macropomum fish in Peru's Pacaya-Samiria National Reserve. However, it was not clear how far the creatures might carry these seeds, nor whether they deposited them in areas where such seeds might grow.

To answer these questions, Anderson, then at Cornell University in Ithaca, New York, and her colleagues radio-tracked 24 of the animals during three flood seasons at the reserve and found that the location of wild fish varied by as much as 5.9 km. Combining this with data from captive fish on how long seeds are retained in their guts, the authors predict that C. macropomum probably have a mean dispersal distance of 337–552 metres and can carry seeds up to 5.5 km. 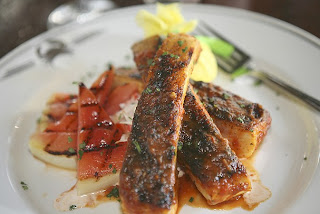 I was pretty familiar with the Pacu from my teenage years I spent working in a tropical fish store.  Pacus look a lot like Piranhas, except for their blunt, crushing teeth.  I had never heard this before, but apparently you can make pretty good ribs out of a big Pacu.  It's not uncommon to find one giant Pacu taking up a big tank in a restaurant.  Maybe being saved for a special meal.
Posted by Fritz at 6:00 AM

Email ThisBlogThis!Share to TwitterShare to FacebookShare to Pinterest
Labels: fishing, food, Me, science