Berlin's beloved polar bear Knut, who rose to stardom when he was hand-raised by zoo keepers after being rejected by his mother rejected at birth, died on Saturday, a zoo official said.

"He was by himself in his compound, he was in the water, and then he was dead," said Kloes. "He was not sick, we don't know why he died."

A post mortem will be conducted on Monday to try pinpoint his cause of death, he said. 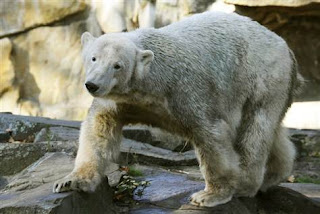 UPDATE: In the video below, Knut circles oddly, then appears to have a seizure before falling into the water in his enclosure:

UPDATE: Knut suffered an epileptic seizure, fell in to his pool and drowned. Pretty much what you might surmise from the video.
Posted by Fritz at 5:40 PM