The ultimate rifle: British snipers to be armed with supergun that pinpoints the enemy by 'hearing bullets'

A supergun that targets enemy snipers by the sound of their gunfire is being trialled by British soldiers, it emerged today.

The 'gunfire locator' is fitted next to the scopes of rifles which uses sonar to calculate an enemy's position within 1.3 seconds.

Paratroopers even field-tested the device by offering themselves as targets to Taliban insurgents last weekend in order to draw out the fire. 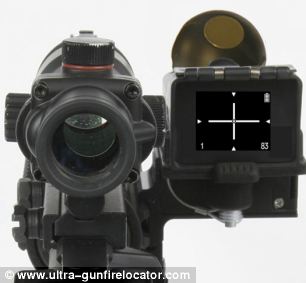 This seems like such obvious technology; once you think about it.  I wonder where they got the idea...

The same technology used in Nintendo Wii games - where players use wireless controllers - has been used to develop the sensor.

A cross-hairs target on the device is able to display the enemy sniper's position using sensors that pick up the range and elevation. The soldier can then fire back with speed and precision accuracy.

'It enables you to run away in the right direction or take cover. You can also return fire accurately. We need to save lives, and you do that by knowing where the enemy is,' developer Colin Howard told The Sun.

The SAS and front line troops currently serving in Afghanistan will be the first to use the high-tech pods.

Now all it has to do and point itself and pull the trigger.  Skynet here we come!
Posted by Fritz at 9:48 PM