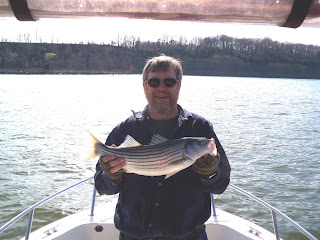 Charlie and I took the late afternoon off to go fishing.
We took my boat out around 3 PM and headed down the 3 or so miles to Calvert Cliffs Nuclear Power Plant.  We had hoped the Japanese power plant disasters had discouraged  other fisherman, but no such luck; there were 5 or 6 other boats there most of the time. 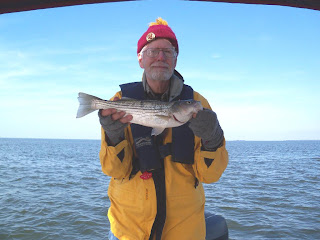 Soon after we arrived, a boat close to us landed and released a BIG fish, 42 inches by their report, and I believe it.  Charlie and I had to content ourselves with some small to medium fish for a while. 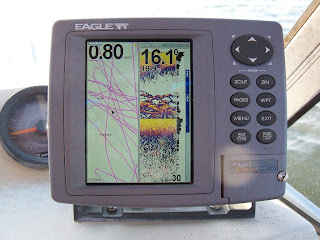 It got a little windier and it was hard to hang into the rip to fish.  On one drift, we wandered out to the outside down wind, and low and behold, on the depth finder, a mother load of fish.  Fish, maybe, hungry, meh, not so much.  Anyway, we caught a few and then... 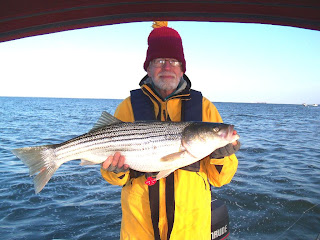 Charlie hooked this one, which turned out to be 32 inches, an almost perfect double of the one I caught last week.  That gave us the incentive to stay around a while longer, until the sun was almost down behind the cliff. 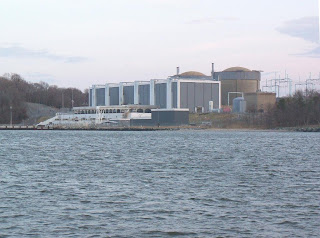 Not the best sunset picture I've ever taken, but that's the way it was.

Calvert Cliffs from the water as we were getting ready to leave for home.


Thanks for the company, Charlie!
Posted by Fritz at 8:49 PM