I Thought Oil From Dinosaurs Was a Myth

On Monday afternoon, a shovel operator at a Suncor oilsands mine site noticed what looked like brown discs in the black rock on a small cliff he was excavating.

Per Suncor's policy, operator Shawn Funk shut off his machinery and reported that he'd found something unusual.

"It was really like finding a needle in a haystack," said Suncor spokeswoman Lanette Lundquist.

The area remained closed to work while Suncor took pictures of the curious find and sent them to the Royal Tyrrell Museum in Drumheller...

..."This thing is in a giant lump, about 85 per cent of it is still in the hill. This is a perfectly preserved three-dimensional fossil. This is the earliest, most complete find in Alberta. This might be the best one so far."

Henderson believes the bones belong to an ankylosaur, an armoured herbivore covered in plates and spikes, with "wimpy little teeth."

When alive, it was roughly five metres long and two metres wide.

So what would a dino babe do with an Ankylosaurus? 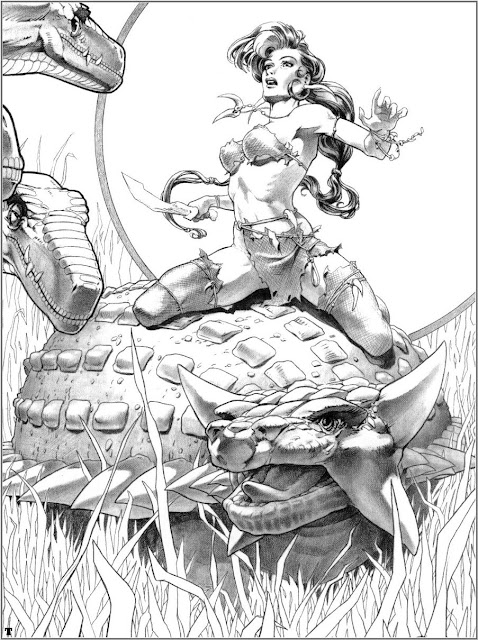