It's Gonna Be Biblical!

The Red Wave, that is. AllahPundit at Haut Hair  hears as Dem strategist: We're facing a "biblical disaster" in the midterms

Team Blue is running out of time for an electoral gamechanger. Their best chance is the Supreme Court overturning Roe in June, but if that doesn’t kickstart Democratic enthusiasm to turn out then they’re facing a truly epic beating this fall. All hope that inflation might fade soon organically, without painful intervention from the Fed, seems to have been lost. And the White House appears intent on following through with lifting Title 42, creating a border stampede that’s likely to tilt the remaining Democratic-leaning swing voters towards Republicans.

CNS News, ABC News/Ipsos Poll: 69% Disapprove of Biden's Handling of Inflation as Mortgage Rates Hit Decade-High (HE) and Leslie Eastman at LI reports that Biden Suspends Summertime Ethanol-Fuel Ban in Desperate Bid to Ease #Bidenflation. I don't have the time or energy to list all the reasons that this is a bad idea, but consider this one, as Russian and Ukrainian grain harvests get hammered, the US is going to dump more into gas tanks? What will that do to food prices here, and around the world?

Ben Domenech looks at the numbers and concludes, The Left Lost Hispanic Voters When It Chose To Be The Party Of White Woman's Instagram, "One aspect that shouldn’t be underrated is this: that Latino-interest media gave Democrats a constantly renewed false perspective on the relative priority of immigration, and that having a soft immigration policy was an unquestionably good way to reach Hispanic voters." Christian Datoc at WaEx reports Majorities see Biden's latest border order as huge mistake. As Buses Arriving in DC With Illegal Aliens Blow up One of Biden's Biggest Lies and Leave the WH Babbling, (Nick Arama at Red State), and KT at Haut Hair, First Texas bus of illegal migrants arrives in D.C., Cuccinelli blasts Abbott's actions, Capt. Ed at Haut Hair finds Sinema wondering If the CDC is extending mask mandates in transit, why is Biden lifting Title 42?

In miscellaneous politics, The Conservative Brief is overjoyed as DeSantis Makes Major Move To Bring Big GOP Gains: ‘Entirely Wiping Out’ All Democrat Gains Nationally. Matt Margolis at PJ media hears rumors; Is New York Shifting Red?, or at least purple? From Fox, RNC votes to withdraw from Commission on Presidential Debates, "RNC promises to work through 'newer, better debate platforms' for GOP nominees" and at Da Caller, RNC Votes To Withdraw From ‘Biased’ Presidential Debates. The debate moderators have been Democrat operatives for years. It's time to put our foot down and fix it. Rick Moran at PJ Media on National Democrats Strip Iowa of 'First in the Nation' Election Contest. It's too white.

At Wa Ex a Report that Trump invests $500,000 in bid to unseat Georgia Gov. Kemp. AllahPundit is pissed All in: Trump's PAC finally spends some big bucks in 2022 -- to try to take down Brian Kemp. No love lost their, but half a mil doesn't strike me as a game changer. WaEx also reports Trump plans to endorse JD Vance in contentious Ohio Senate GOP primary. He tends to favor non-traditional politicians. Like, Dr. Oz? AllahPundit, Laura Ingraham: I'm not afraid to say that Trump endorsing Dr. Oz was a mistake. Breitbart has Resurfaced Video Showing Dr. Oz Praising Jussie Smollett After Hoax Attack. At the Tennessee Star TN Secretary of State Offers Conflicting Comments on Whether He Will Enforce Residency Law and Remove Carpetbaggers from the TN-5 Ballot (Robby Starbuck, Morgan Ortagus, Baxter Lee, and Stewart Parks).

Ace, Glenn Youngkin Submits Bill Accelerating Re-Election Date for All Nine Members of Loudoun County School Board, Forcing Them to Face Voters This Year, If Passed

Will the tyrants be forced to face the peasants they've been abusing?

Before getting too excited: Remember, the Virginia Senate remains in Democrat hands, only because the Senate didn't come up for reelection last year. Youngkin will need Democrat vote to get this to pass.

Rod Dreher atAm Con Won’t Get Fooled By Groomers Again. At 538, Why So Many Conservatives Are Talking About ‘Grooming’ All Of A Sudden. It's mean to do they, us liberals are supposed to control the terms of debate! Eddie Scarry at Da Fed claims Washington Post’s Aaron Blake Defends Groomers In Public Schools. Rabbi Fischer at Am Spec imagines a conversation, Hey Kids, Let’s Talk About Penises and Vaginas!, "In the modern classroom, with first- and second-graders." At Da Blaze, Pennsylvania town removes 'Easter' from egg hunt promos after single complaint — and the backlash is fierce. From Fox, School systems are 'usurping family responsibility,' Betsy DeVos says. Yep. Olga Khazan at the Slantic says Republicans Have Sex Ed All Wrong. "Some pundits say that talking with little kids about sex and gender primes them to be taken advantage of. Sex-ed researchers say that the opposite is true." Sex ed can be done right, but mostly, now, it's just an excuse for infiltrating LGBTQRSTUVWXYZ propaganda. Things that make you go hmmm, at Da Mail, Two inmates at all-women's New Jersey jail are PREGNANT after both had sex with transgender prisoners: ACLU won battle to house 27 trans inmates there. Fresh from the College Fix, University misrepresented study by claiming puberty blockers help teens’ mental health

And most of the illiterati have been consumed with the battle between Twitter and Elon Musk, who seems poised to attempt a hostile takeover of the platform. Stacy McCain, The Action and the Reaction:

What have we learned here? A self-declared “free speech absolutist” makes an offer to purchase Twitter, and many liberals instantly get nightmare visions of Hitler.
. . .
Liberals consider censorship necessary to “Our Democracy” for the simple reason that their ideas can’t compete in a free market of uncensored communication. CNN once had a monopoly on cable news; when Fox News offered an alternative, they almost immediately became Number One and nowadays CNN has lower ratings than reruns of Spongebob Squarepants. In the early years of Twitter, conservatives used the platform so effectively that liberals demanded censorship — this was at the heart of the online battle that became known as #Gamergate.

Silencing dissent and criticism, effectively declaring that their opinions are the only valid opinions and that all disagreement is “hate,” liberals seek to obtain through censorship what they cannot achieve through public debate. It doesn’t matter what the issue is, their approach is always the same. 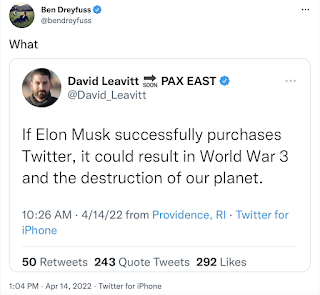 Insty, at His NYPo gig, ‘Censorship is free speech’ is the establishment’s Orwellian line on Elon Musk’s Twitter crusade.  and Insty, I MEAN SURE, MAYBE… The Twitterati are taking this whole “possible free speech” thing super well and I, for one, am glad they are the people who set the agenda for our public discussion. Matt Taibi says  Twitter's Chickens Come Home to Roost, and they were vultures.  Da Caller snarks ‘Great Day For Diversity’: Elon Musk Poised To Be First African American To Own A Major Social Media Company (Musk is from South Africa). At Da Wire, Musk Reveals During TED Talk That ‘There Is’ A ‘Plan B’ If Twitter Rejects His Offer To Buy The Company. But won't explain. AllahPundit not convinced, Elon Musk: I don't want Twitter to make money, I want it because we need an inclusive arena for free speech. "What do we have to lose? If all Musk does after acquiring Twitter is block every political operative and reporter from accessing it, he’ll have improved society by 10 percent overnight." At some point, you have enough money. Might as well have some fun with it. Twitchy, has a Report: Twitter CEO Parag Agrawal ‘in danger of losing his employees’. Not a lot of sympathy to be had. Althouse, "Musk’s attempted takeover came in the middle of a 'focus week' at Twitter. Employees were treated to... minimal meetings throughout the week." "From "Twitter employees complain that Elon Musk ruined their calm 'focus week'" (Fortune)."

That's kind of a junk article compared to what I was trying to find, which is something more like percentages of Twitter workers who hate the idea of Musk taking over and those who like it or are neutral. What proportion of Twitter workers have jobs devoted to the kind of censorship that Musk might seem to be about to eliminate? Are these people planning to quit? Do they think they might sway Musk to appreciate at least some of their moderating function? Are they just hoping to hold onto their jobs and ready to readjust to the new agenda? How passive and resigned are they? Is there some plan of action? Are they preparing sabotage?

Nick Arama at Red State looks abroad, Saudi Prince Tries to Throw a Roadblock Into Musk's Twitter Deal, but Elon Levels Him With Response, Elon Musk@elonmusk, Replying to Alwaleed_Talal@Twitter and @Kingdom_KHC, Interesting. Just two questions, if I may. How much of Twitter does the Kingdom own, directly & indirectly? What are the Kingdom’s views on journalistic freedom of speech? Jim Treacher, Elon Musk Seems Like a Cool Guy and Maybe He'll Hire Me at Twitter. "No matter what happens, libs are panicking. So that’s always fun to watch. We’re already seeing Orwellian horsecrap about Musk being a threat to free speech because he wants people to be able to say whatever they want..." Doug Murray at NYPo, Dear Elon: Here’s five things you can do to make Twitter better. Includes shoot into space, but not nuke from orbit. Also at NYPo, Donald Trump insists he won’t return to Twitter if Elon Musk buys it. Too boring. Jazz Shaw at Haut Hair notes that If Twitter doesn't want Musk, Gab does. But I think Elon wants the real thing, not the pale substitute. Meanwhile Twitter continues it's campaign against conservative thoughts, Jordan Boyd at Da Fed, Twitter Punishes Libs Of Tik Tok For Daring To Expose Radical Leftism, "Essentially, Twitter deemed it illegal to amplify what gender-bending, Trump-hating, racist, groomer leftists have already revealed about themselves online."

And quite coincidentally I'm sure, Charles Gasparino@CGasparino, "BREAKING: As @elonmusk offers to buy the rest of @Twitter a legal source tells @FoxBusiness @SECGov and @TheJusticeDept have launched what he described as a "joint investigation" into a myriad of Musk regulatory issues primarily involving @Tesla"

Linked at Pirates Cove in the weekly Sorta Blogless Sunday Pinup and links. The Wombat has Rule 5 Sunday: All Sydney, All The Time! and FMJRA 2.0: Not Long Before The End awaiting your digital pleasure at The Other McCain.