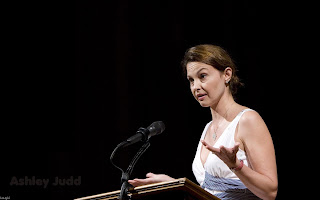 Ashley Judd may be pursuing a new role: U.S. Senator.

The Hollywood actress is seriously considering running against the top Senate Republican, Mitch McConnell for a seat representing her native Kentucky, Politico reported, citing four people familiar with the matter.

In recent weeks, the Democrat has discussed a potential 2014 campaign with New York Sen. Kirsten Gillibrand and a Democratic pollster. She is also conducting opposition research on herself to gauge her weaknesses.

One weakness might be her previous film roles, in which she has spent a lot of time unclothed and faking sex.  Or maybe enjoying it, it's often hard to tell...


“She is doing all the things that a serious candidate exploring a race should do,” Kentucky Rep. John Yarmuth told Politico after speaking with her. “I think there are a lot of people, and I was one of them, who wanted to let her know that her candidacy would be an exciting prospect for us.”

One quality she has that politicians clearly require is shamelessness..

Without commenting directly on Judd, McConnell’s campaign manager, Jesse Benton, warned the political news site that the Kentucky Republican will not go easy on whoever runs for his seat.

Speaking of seats. It's nice to be able to sit down on the job.

“It’s going to sting,” Benton said. “We’re going to make sure that you don’t come out with your nose clean. We’re going to drive your negatives up and very aggressively and publicly litigate your record before the citizens of Kentucky.”


As a less daunting alternative, Judd is also considering a 2016 bid against freshman Sen. Rand Paul instead, sources told Politico.

When asked about her political plans, the actress has previously said she is “honored” by suggestions that she run for office. Politico said a Judd spokeswoman declined to comment on the latest reports of her possible bid.

Just flash your tits, Ashley, that'll do it (sadly, it just might).

The Wombat had a busy week, so Rule 5 Sunday at The Other McCain done come on Tuesday again this week!
Posted by Fritz at 6:00 AM