But I commit redundancy.

David Gregory appears to be in a little trouble over his  brandishing a 30 round magazine at Wayne LaPierre in NBC's Washington D.C. studio on "Meet The Press" this last Sunday.  The Washington D.C. Police Department has been advised of the infraction of DC's strict gun laws, and have launched an investigation of the alleged violation.  Furthermore it has been revealed that NBC sought permission from the police to have the magazine in the studio, and were denied, thus removing any hope of pleading ignorance to the charge, should it actually be made.

However, the mainstream media and liberals have rallied to his defense, apparently secure in their belief the liberals are allowed to violate the law in the interests of the agenda:

Harvey Kurtz of CNN and The Daily Beast, wrote:


Was the moderator of Meet the Press caught on tape, armed and dangerous, liberating a few Slurpees from a 7-Eleven? No, he waved a high-capacity ammunition clip on the air while interviewing Wayne LaPierre, asking it shouldn’t be banned.

Was it a stunt? Yep, and an eye-catching one. Was Gregory being aggressive with the NRA chief, or seeming to push gun control in a confrontational interview? All that is up for debate.

But a police probe over what I assume was an empty ammo clip is a total waste of time.


Why isn't Cathy Lanier* killing this stupid @davidgregory gun law story? He was clearly acting in the public interest.

Dylan Beyers, also of Politico also apparently wrote something nasty about right-wingers obsessing over the violation and forcing the D.C. to investigate Gregory, before editing the post to an innocuous statement that Gregory would not host Meet the Press next week because a scheduled vacation.  Does he announce every wannabe Ron Burgandy's vacation?

As Alinsky said in RULE 4: “Make the enemy live up to its own book of rules.” If the rule is that every letter gets a reply, send 30,000 letters. You can kill them with this because no one can possibly obey all of their own rules.

The schadenfreude is so thick you could cut it with a knife.  And it tastes delicious.

UPDATE (even before posting),  Obama Bureau of Alcoholics and Firearms granted an indulgence to David Gregory and NBC.  I don't see how they can grant it, since the violation was a D.C. Law and not a Federal crime, but you know it's a government of man, not laws and all that. 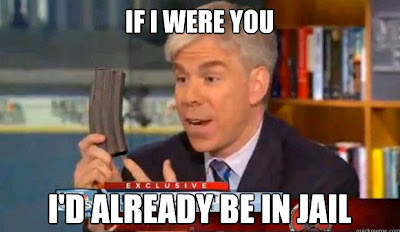 There's a fun Twitter string over at Legal Insurrection starring Iowahawk and Ace.

David Burge @iowahawkblog
So the press has declared David Gregory not guilty by reason of celebrity.